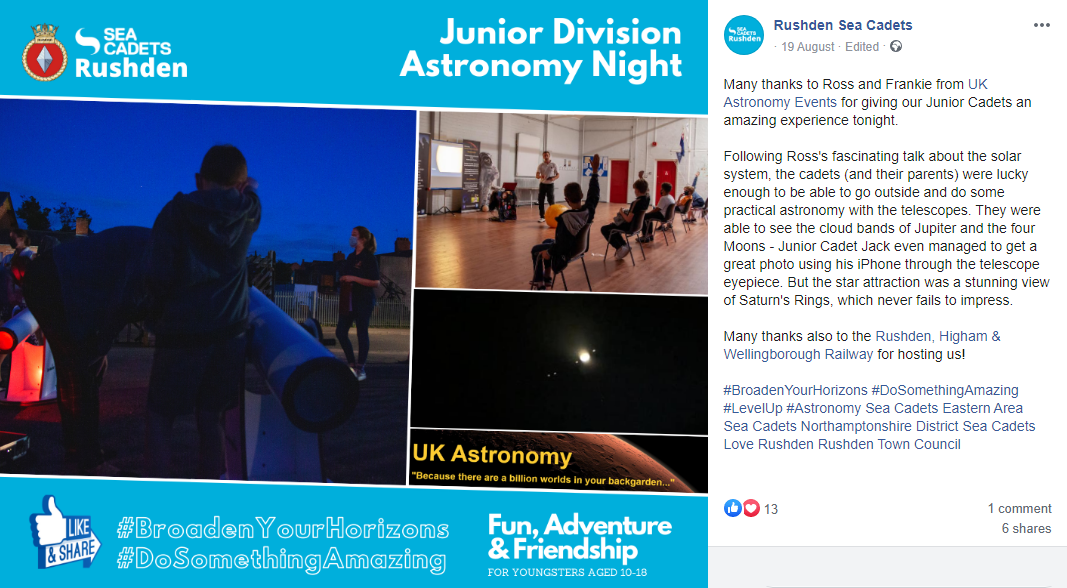 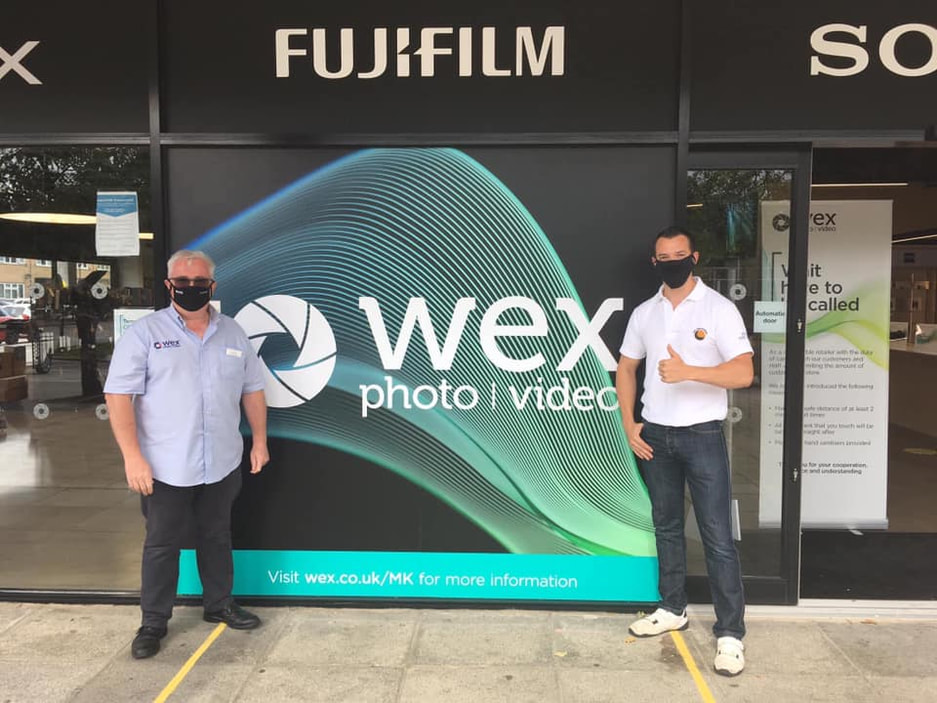 ​Ross had a meeting with the guys at Wex Photo / Video in Milton Keynes.
UK Astronomy and Wex will be hosting a small (Covid-19 Safe) event,
outside of the store on October 22nd (more details to follow).
Wex are willing more workshops etc to help people a bit more on the telescope/camera side.
Two of their staff are also Astrophotographers, so lets see what the future holds.

So with it being International Observe The Moon Night on 26th,
we thought we would add lots of things for you to see on our nearest neighbour.

UK Astronomy's very own 'Wil Cheung' will be hosting a Facebook Live session,
straight from his telescope and answering questions about the Moon.
More information about the event can be found Here.


The Marshall space flight Center, NASA Planetary Missions Program and the U.S. Space and Rocket Center are also hosting a special event, which is going to be live on YouTube.
​ There will be a live planetarium show with interviews with planetary scientists and lots fun and informative activities.
​

Right, on to the month ahead 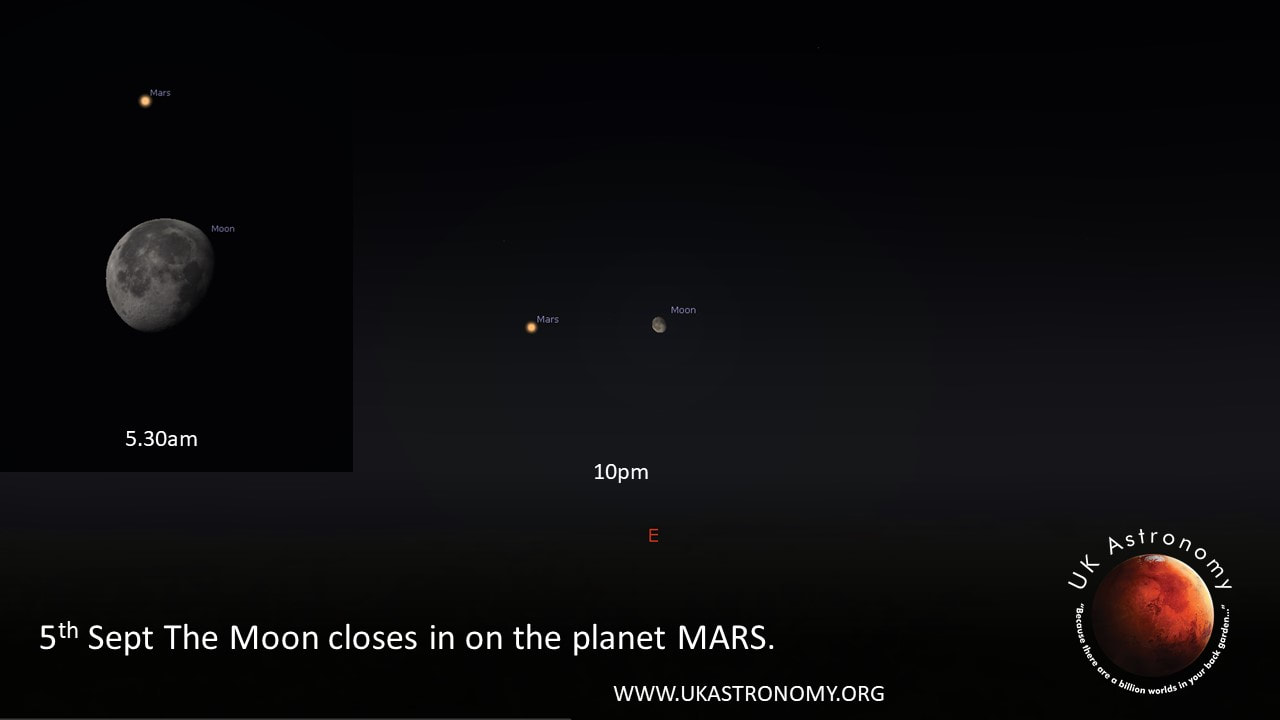 ​5th the Moon is not far from the god of war Mars rising at around 9.30pm becoming even closer to the red planet.
By the morning of 6th, around 6.30am they will seem like they are almost touching.
Not literally as they are millions of miles away from each other.

The Moon also reaches its Apogee today meaning its at its farthest point from Earth and will appear smaller than usual. 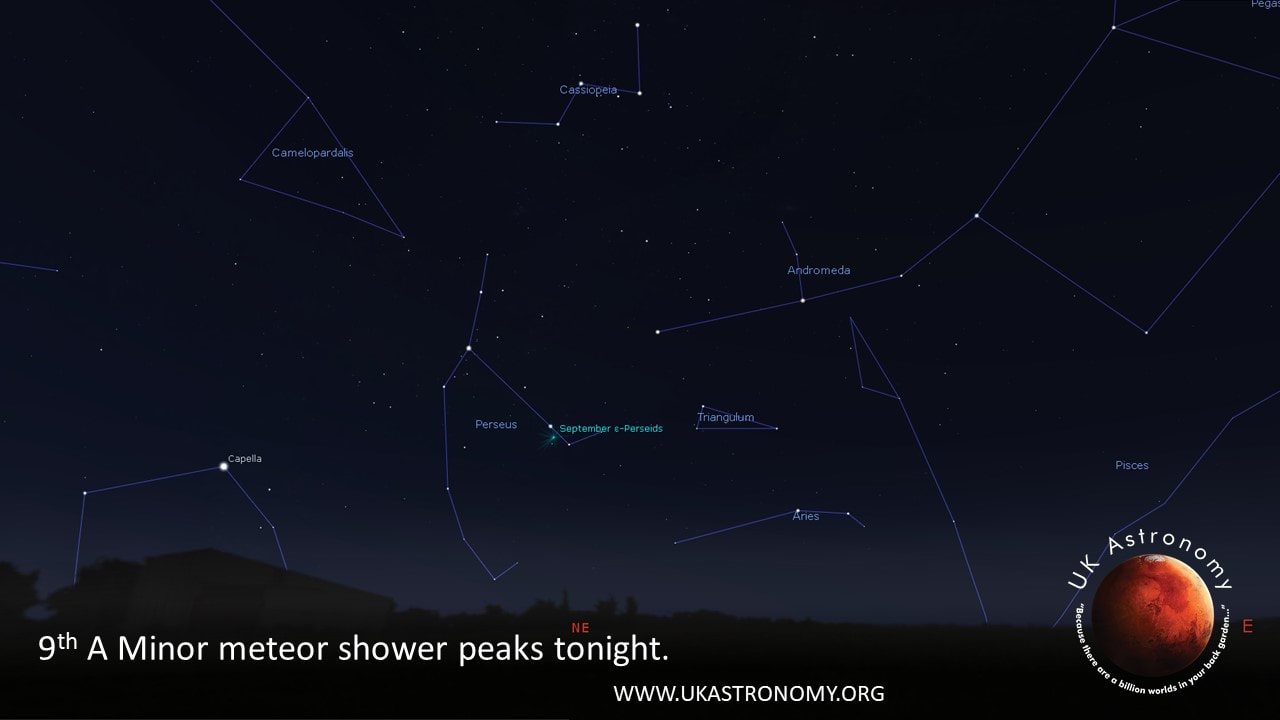 On the 9th There is a weak meteor shower with only around 5 per hour.
The Epsilon Perseid is the lesser known following on from last months biggy.
Again, radiating from below the West in the sky in the constellation Perseus. 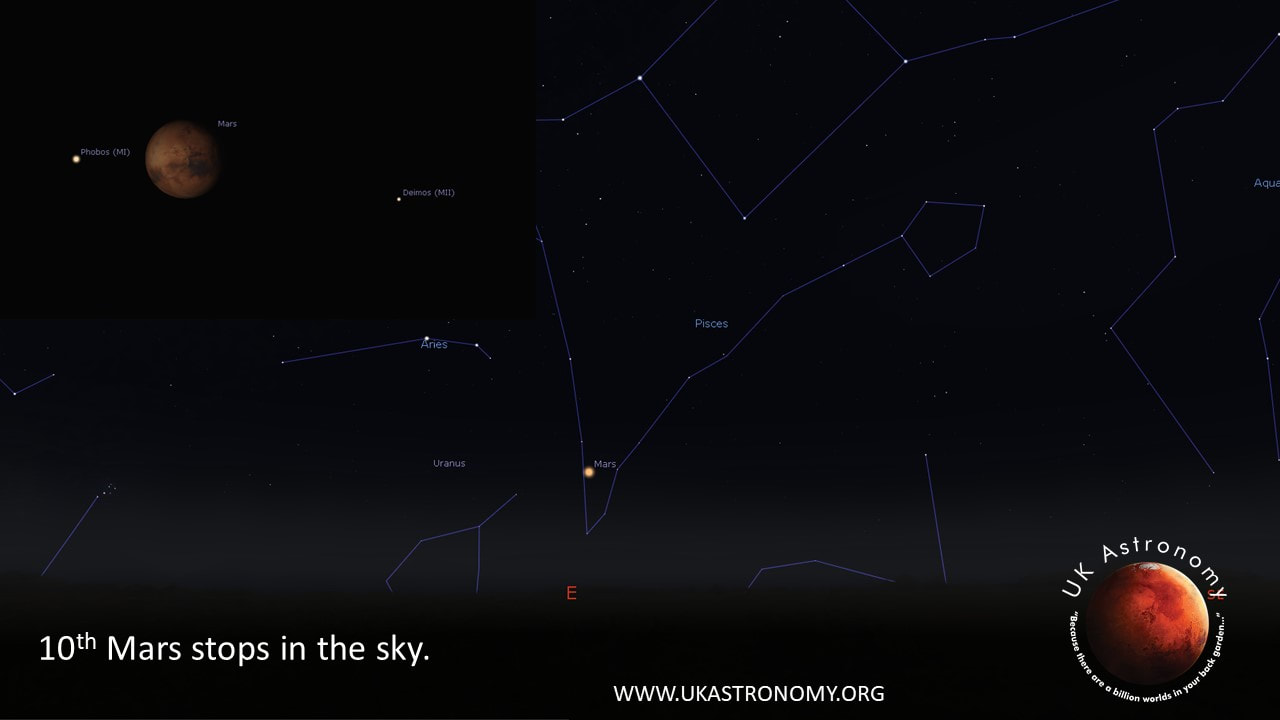 On the 10th, Mars does something a little strange that you wont really notice,
unless you have been marking its position, because of our orbit.
It will appear to stop in the sky, move backwards then reverse back to its normal motion.
It is called retrograde Orbit, where a planet may seem to make a circle in the sky. 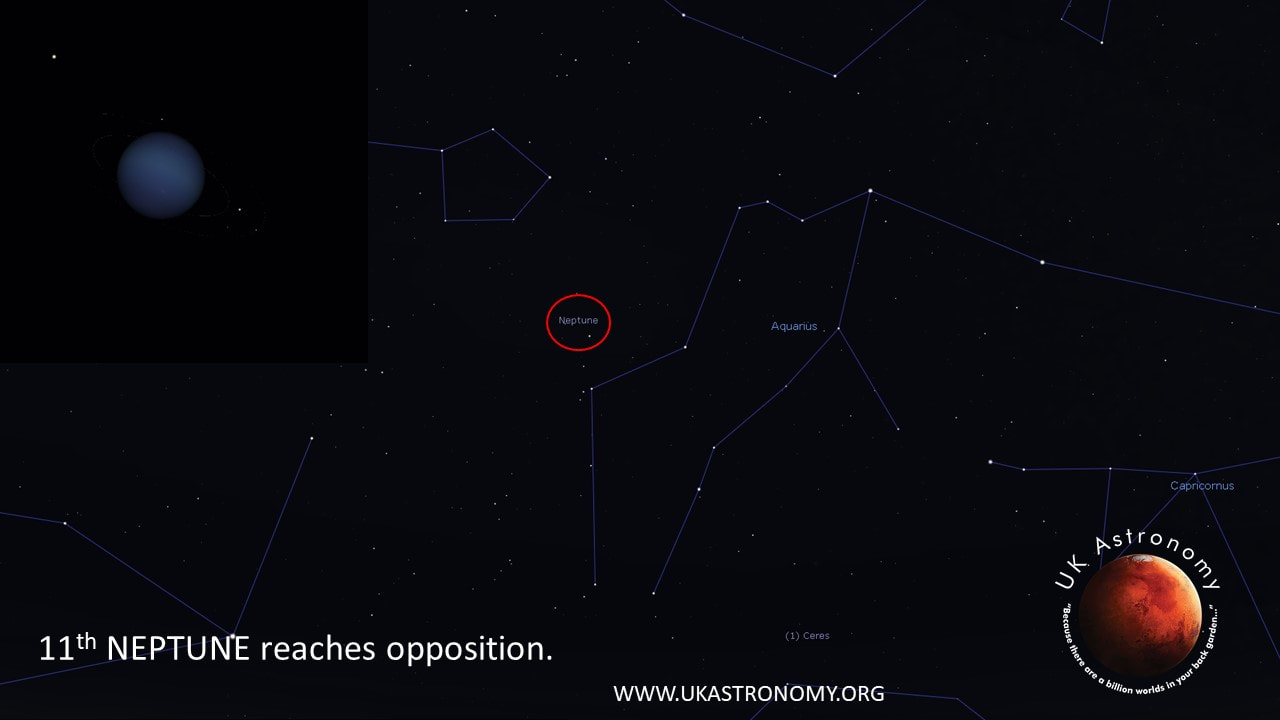 On the 11th Neptune (The Sea God) reaches opposition today.
Which means it’s a good time to try and spot it.
You will need a telescope or maybe a pair of binoculars and a steady hand.
It is located in the constellation Aquarius (The Water Bearer).
​ 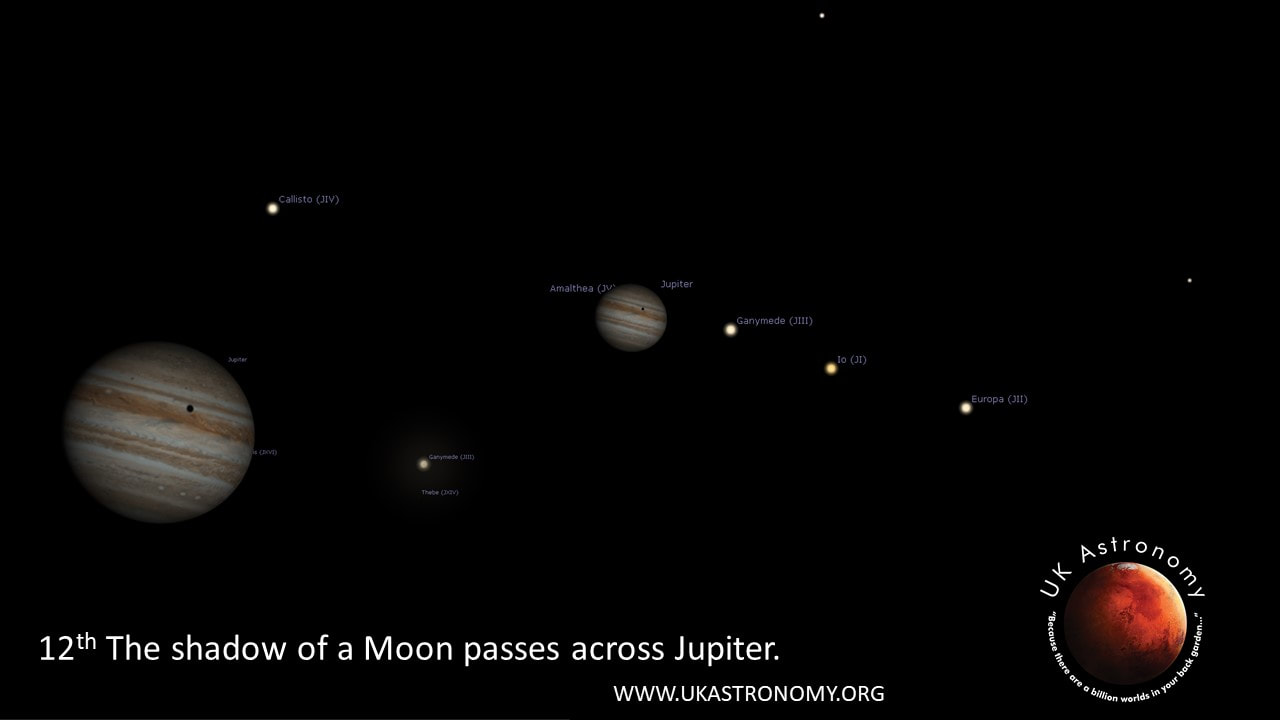 ​On 12th Around about 9pm point your scopes towards Jupiter (The King Of The Planets),
to see the shadow of one of it's Moons (Ganymede) crossing its surface, finishing around 10.55pm. 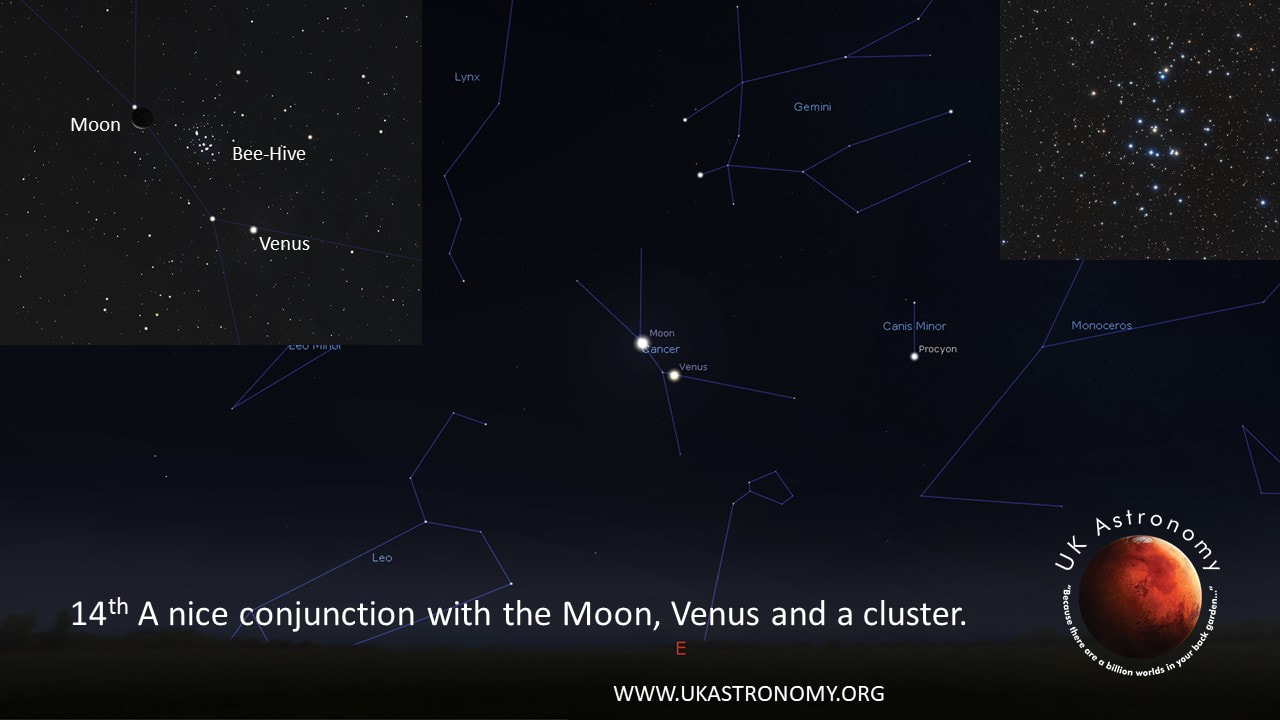 On the morning of the 14th, there will be a nice conjunction with Venus, a thin Moon and M44 The Beehive Cluster.
Which is sometimes called Praesepe.

It can be found in the middle of the constellation Cancer (The Crab).
The colourful cluster and will be wedged between the two solar bodies. 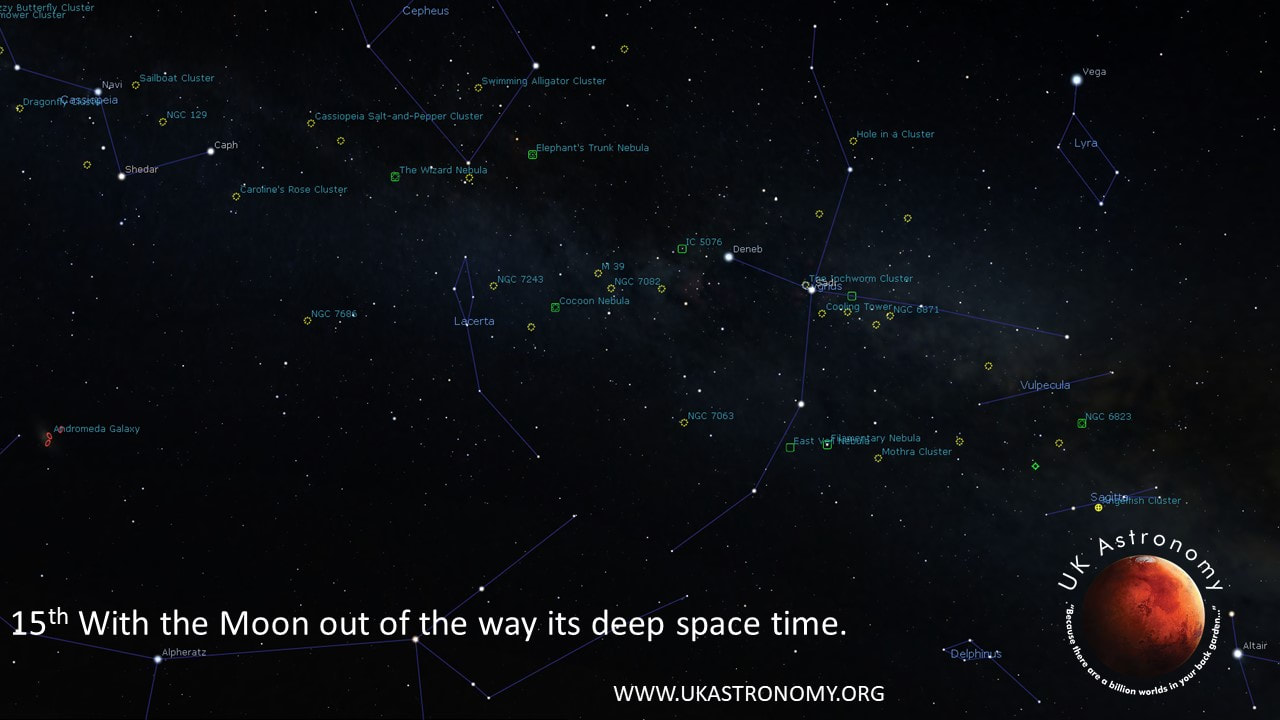 ​On the 15th, With the Moon out of the way we have a few days to get hunting those deep space objects,
like Galaxies and Nebulae.

Why not try out the sky guides at www.ukastronomy.org. 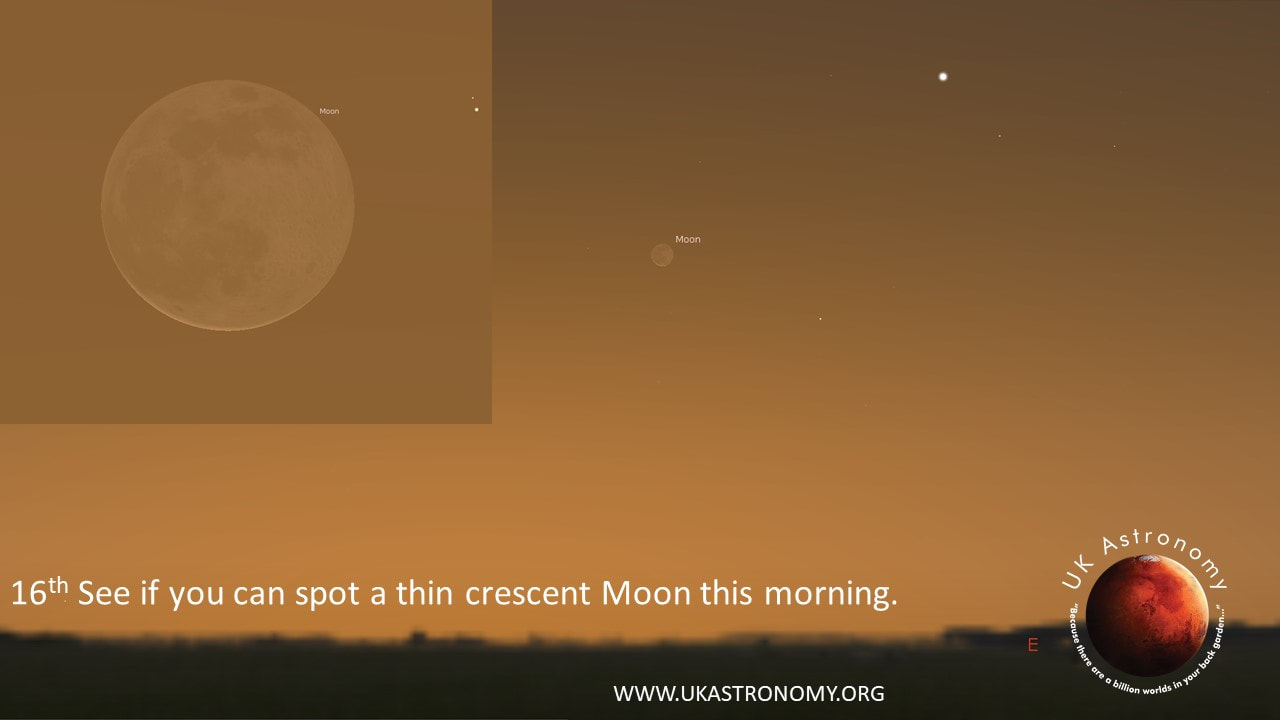 ​On the 16th You may spot a very thin crescent Moon in the morning sky, with a good eye it can be spotted around 5am. 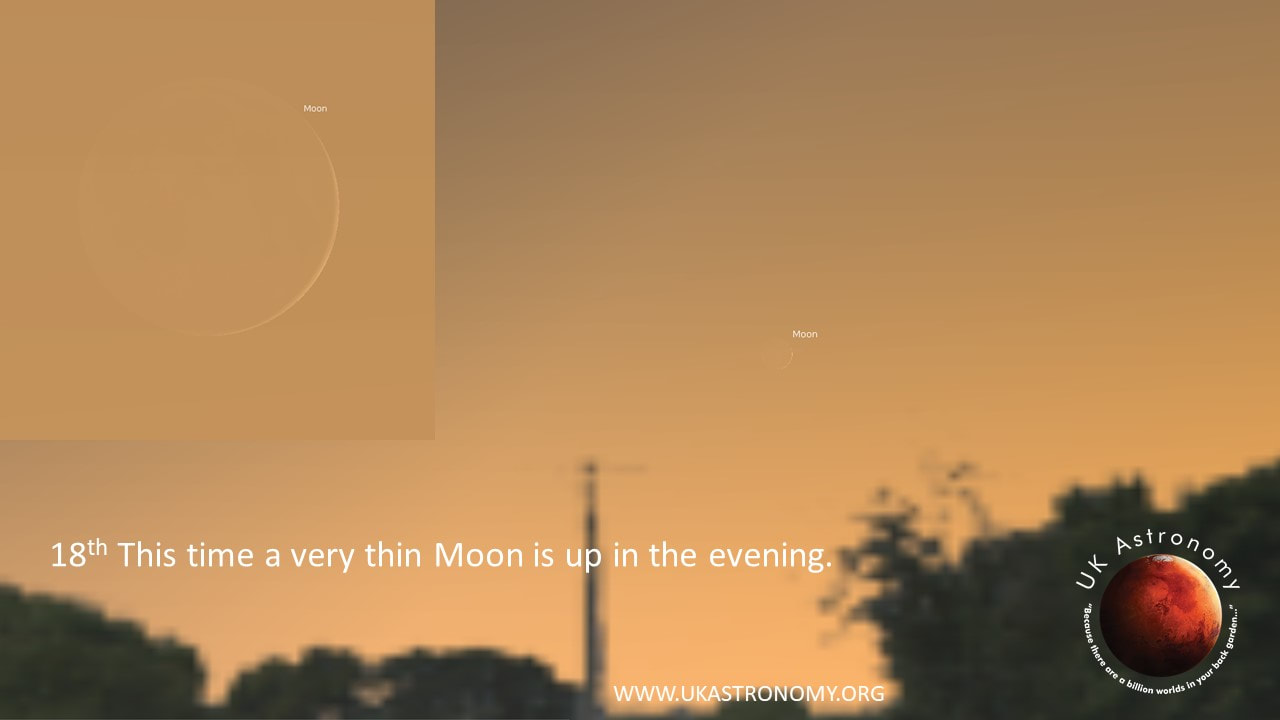 ​ 20 minutes after Sunset on the 18th, the Moon is opposite side of the Sun in our skies.
See if you can now spot an even fainter thin Moon in the twilight.

Although the Moon is at Perigee, meaning its closest approach, it will be a hard spot. 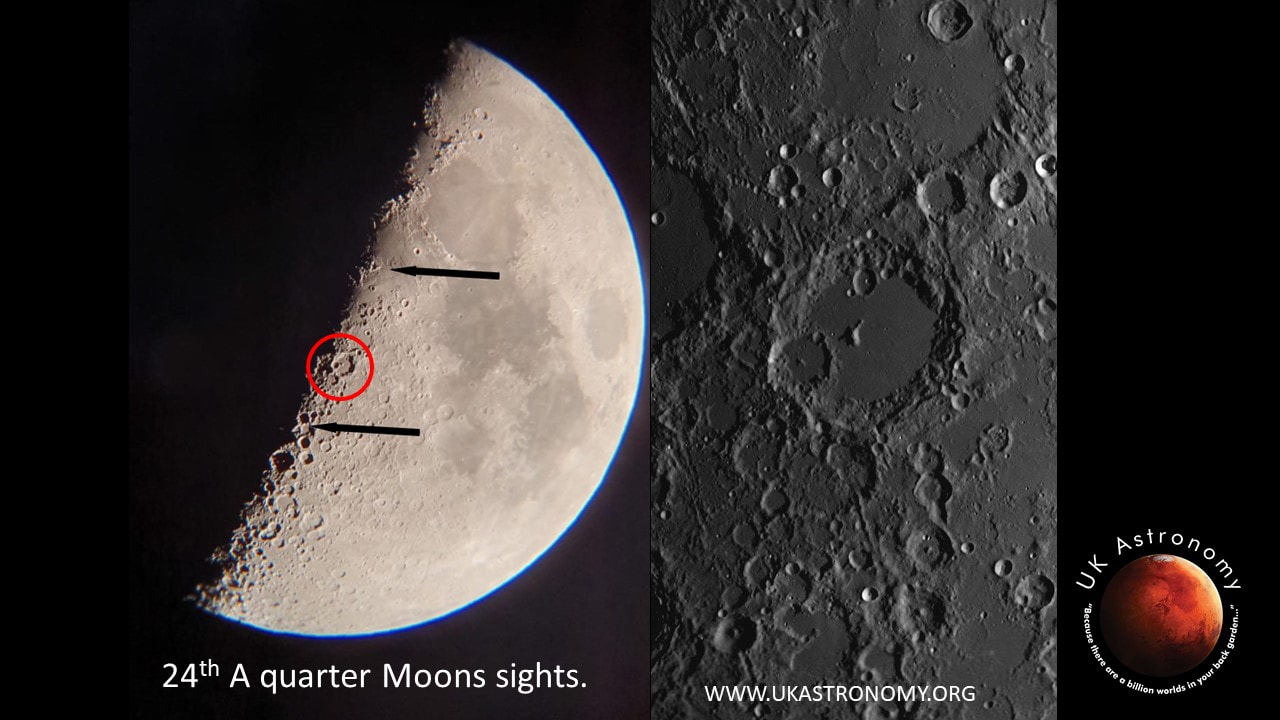 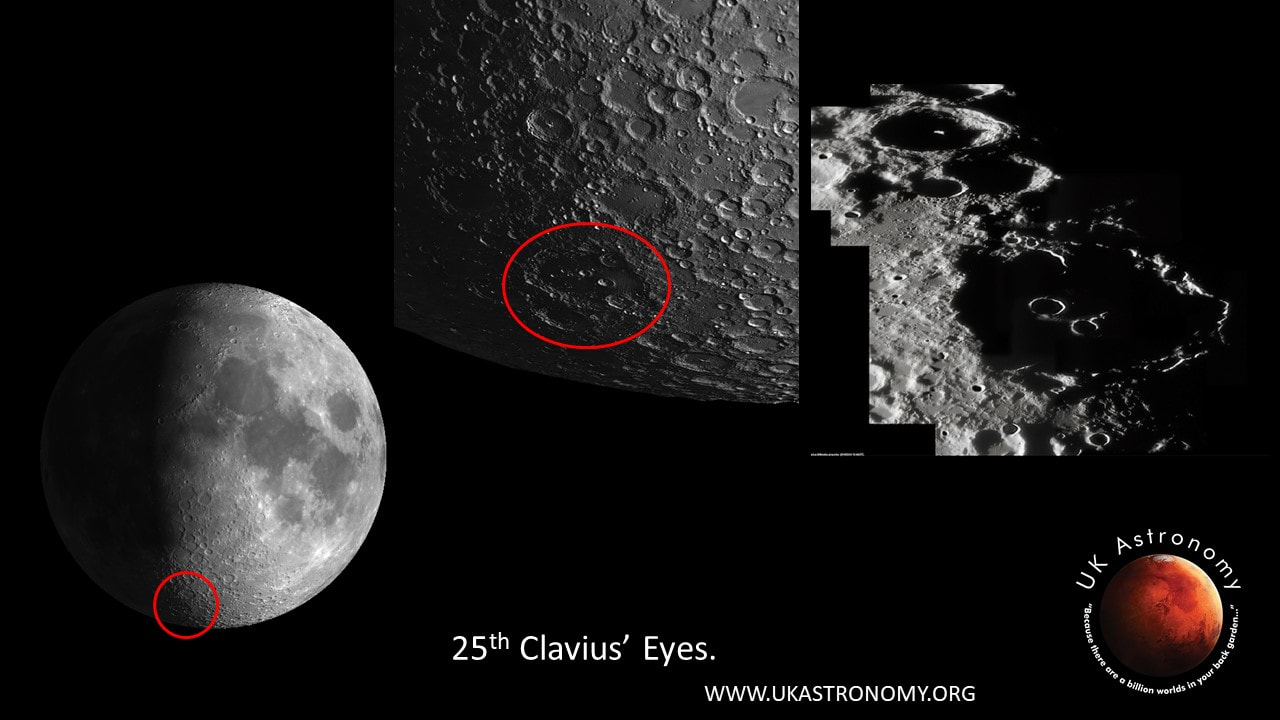 ​On the 25th, if you find Clavius crater at around 10pm a shadow will cover the crater,
apart from the rims of craters inside Clavius.
This is known as Clavius's eyes and they will be peeking out at you.

The Moon will also not be far from the planets Jupiter and Saturn. 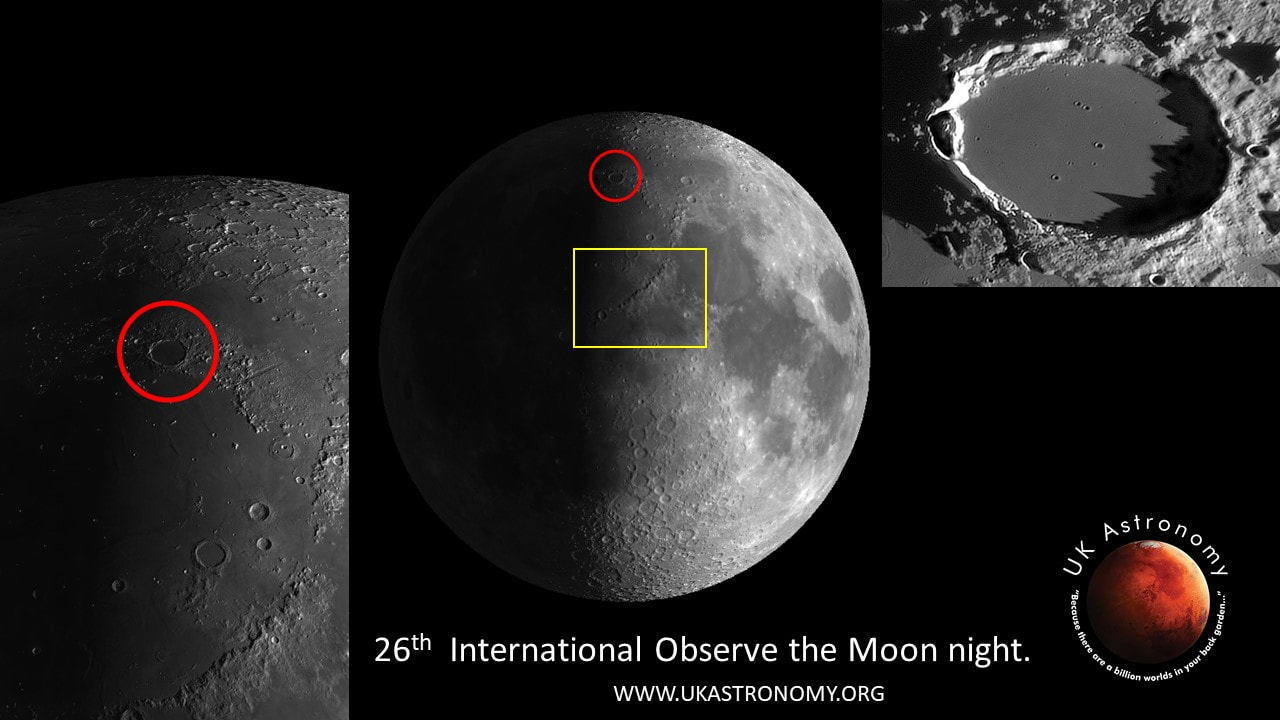 As we mentioned earlier, the 26th is International Observe The Moon Night.
So make sure to get out take photos of the Moon and post them in the UK Astronomy Facebook Group.

Why not look out this cool effect on the Moon tonight!
Find the large crater called Plato, located at the top of the Mare Imbrium (a large flat plain).
The shadow creates a hook shape in the crater tonight (I think it looks like a praying mantis’ leg).


Tonight is also a great night to check out the mountain range just below it called Montes Apenninus.
It should be sticking out of the shadow. 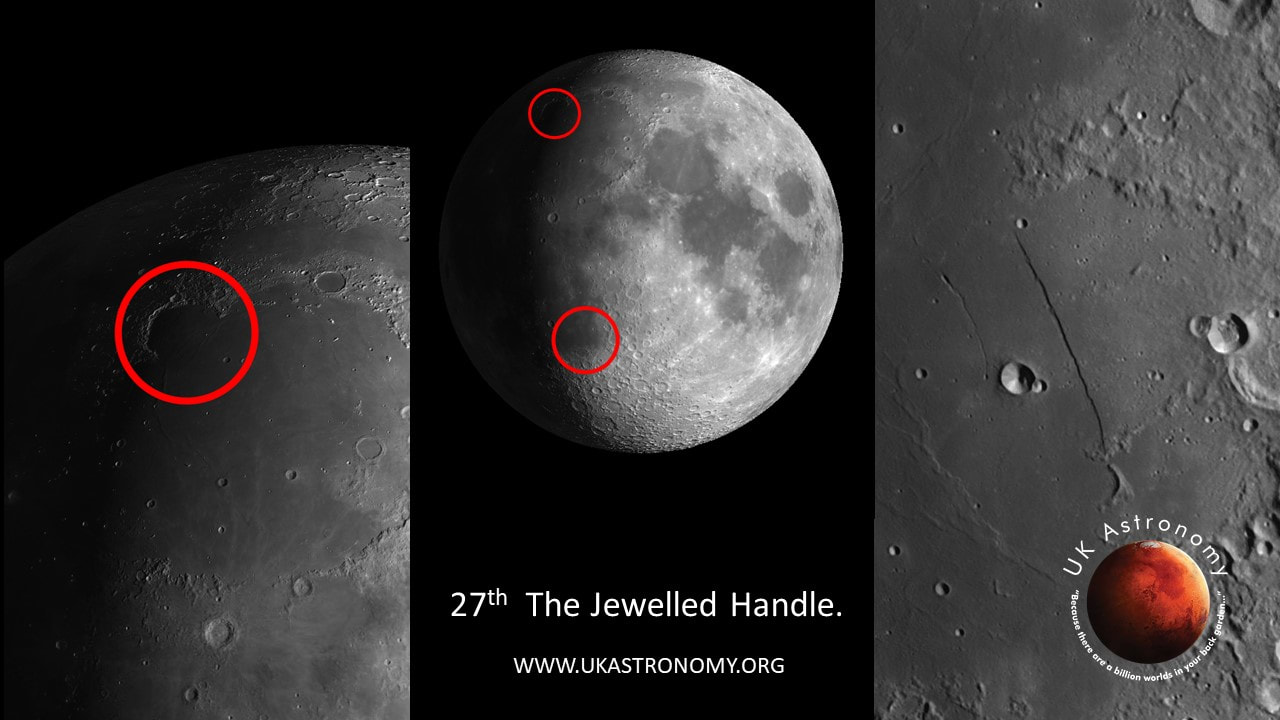 On the 27th look for the Jewelled handle on Moon,
it's an effect on the Jura mountains or Montes Jura, which is part of the Sinus iridium area.

The morning light just catches the peaks of the mountains’ tips creating a cool effect, if you look at the Mare Imbrium which is pretty much the big dark patch at the top of the moon, around 10 oclock it looks like someone’s taken a bite out of the white mountainous area. That’s where the Jura mountains are. 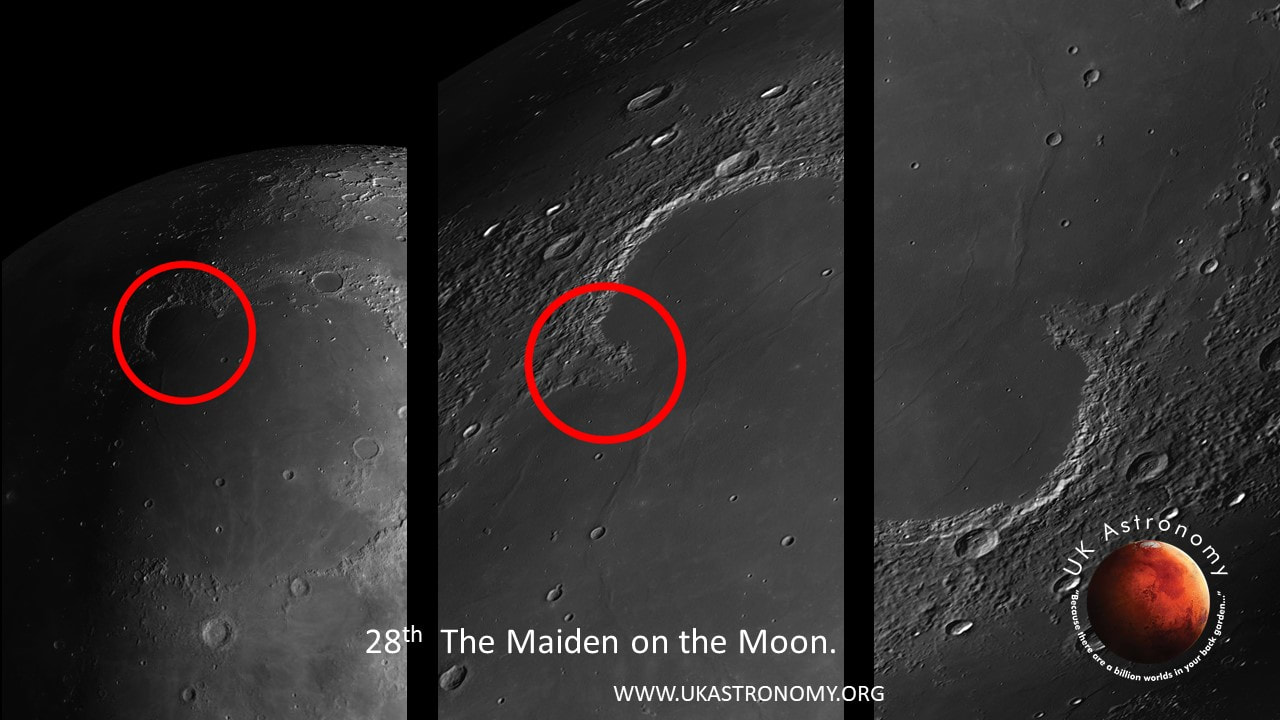 ​On the 28th we hunt for the Maiden on Moon.
It's part of the Montes Jura which is where you saw the Jewelled Handle,
and is a mountainous cape situated in Mare Imbrium.

It's best viewed inverted (Upside Down),
so possibly through a reflector telescope you can make out what looks like a woman sat on a rock with long flowing hair.

And that's your lot for September!

What's coming Up for UK Astronomy:

On the 12th/13th UK Astronomy have been invited to a customised vehicle event in Finedon Northamptonshire.
It's called The Festival of Fuel, which is something we had not thought of… so we will be doing some Solar Astronomy there as well as showing off the Space Crafter.

On 27/28/29th we will be joining Karl Leach and his group of Pavement Astronomers.
I saw in the group that he was out showing people the stars, planets and the Moon and had a queue of over an hour.
So naturally having a mobile observatory I offered to help.
It's all Covid-19 Safe and Regulated and we will be meeting in  Shirley Solihull on which ever night is clear.

Keep an eye on the UK Astronomy Facebook Group for more information and we hope to see you there.
Powered by