​With the planets rising into the night sky.
This month is a perfect time to see the planets Jupiter, Saturn, Mars and Venus.

​
​The funny named planet Uranus can also be found in the morning sky to the left of Mars,
but it can’t be seen with the naked eye so if you have binoculars or a scope have a look.

You will also be able to see Saturn’s rings and Jupiter’s 4 main moons.
Even with just a pair of binoculars and a steady hand.
​
​ 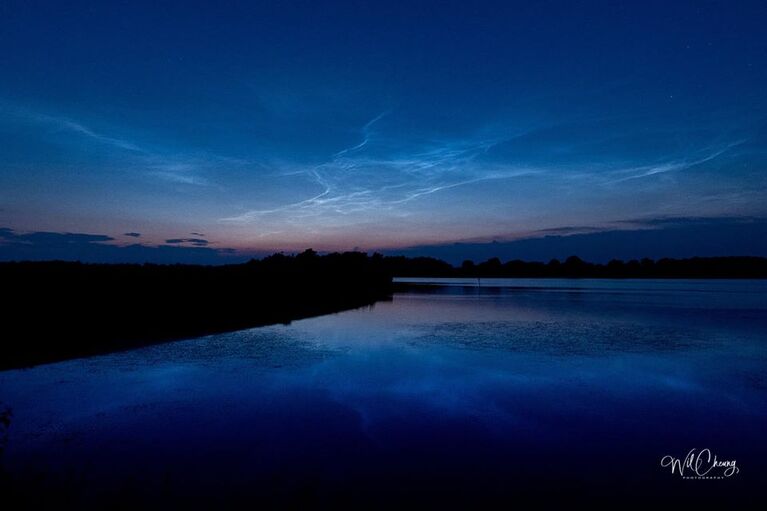 Noctilucent clouds captured in Northumberland by UK Astronomy Volunteer 'Wil Cheung'‎
Astronomers don’t often talk about clouds.
In fact we hate them because they always get in the way of a clear nights stargazing.
But, it is Noctilucent cloud season.

What’s a Noctilucent cloud?
These are burnt up meteor ice crystals that hang in the upper atmosphere and have been seen and photographed in the last month by members the UK Astronomy Facbook Group, look an hour before sunrise or after sunset ad you may spot these wispy white/blue clouds being lit up from below by the Sun. 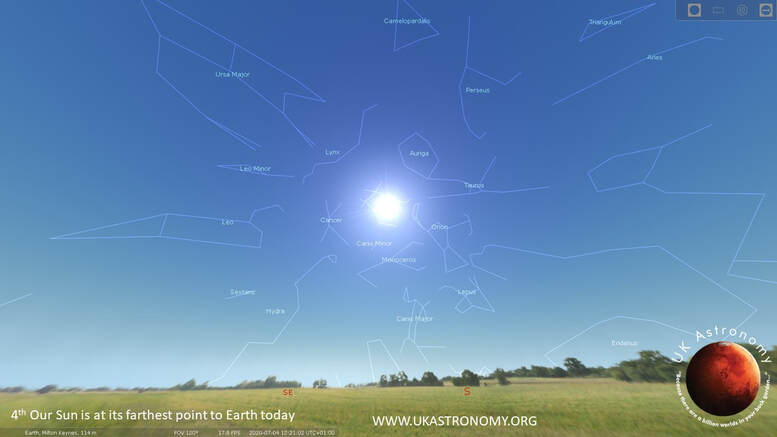 On the 4th Our planet reaches its furthest distance from the Sun,
which may seem crazy as the weather has been pretty hot lately.
But, this is more to do with the tilt of the Earth than its distance.
So the Sun will actually be at its smallest apparent diameter in our July sky (not in the winter)

Just remember to NEVER LOOK DIRECTLY AT THE SUN!
​ 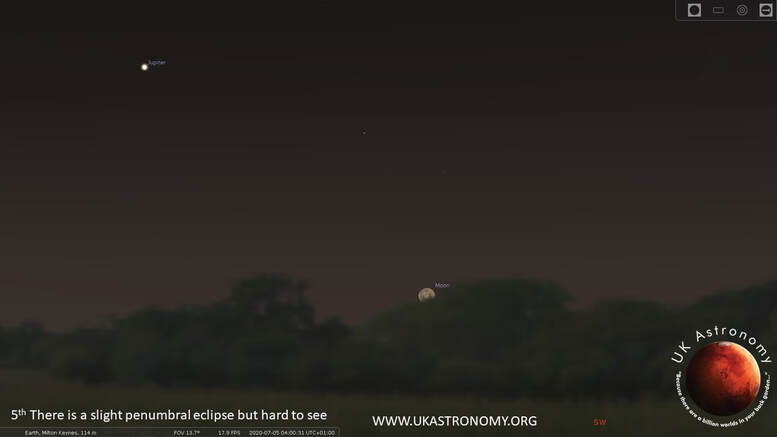 On the 5th There is a Penumbral Lunar Eclipse.
But, it will be difficult to see as the Moon will be setting as it happens.

You might see a slight shadow on the moon, if you have a clear southwest horizon around 4am.

a Penumbral Eclipse is where the shadow of our planet glimpses the Moon creating a darkening on its edge. 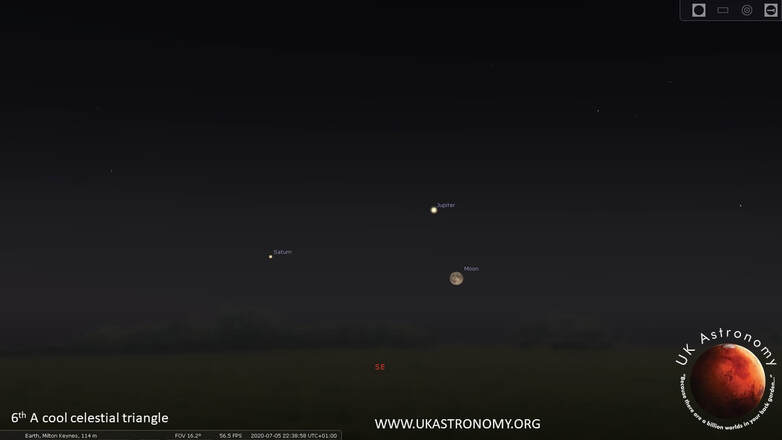 ​On the 6th, The Moon sits under the planet Jupiter, in the sky.
Making a cool celestial triangle, with it and Saturn.
A really awesome sight to see, with a cuppa.

Each morning the Moon will move to the left in the sky slowly approaching Mars.

On the 8th, Venus now reaches its 25% phase this morning and gets higher in the sky,
as it passes through the star cluster known as the bulls head or The Hyades.
The Hyades are a nice V shape cluster of red stars in the constellation Taurus the Bull,
​ with the star Aldebaran being the bulls eye and the brightest. 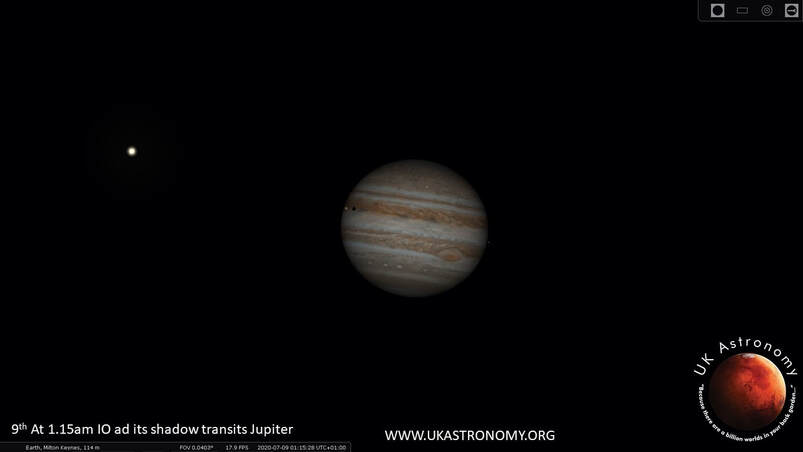 ​On the 9th, Jupiter is approaching opposition meaning it will appear brighter and bigger in the sky,
so it’s a great time to observe the King of the planets.

This morning around 01:15am one of it's Moons IO and its shadow will pass over and in front of the planet.
The moon will be pretty close to its shadow as it passes across,
so a really good view but you will need a telescope or a pair of binoculars to see it. 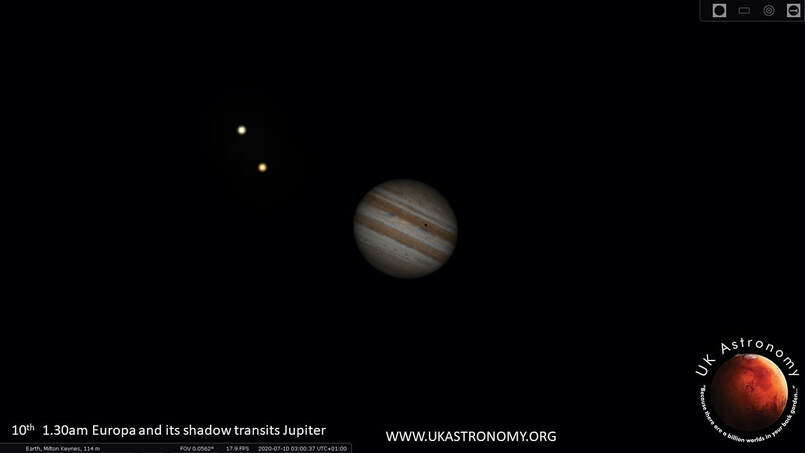 If you missed it yesterday you get another chance on the 10th at around 01:30am.
This time,  it’s the turn of another of Jupiter’s moons, Europa and its shadow,
to pass across Jupiter again almost centrally and close together.
​ 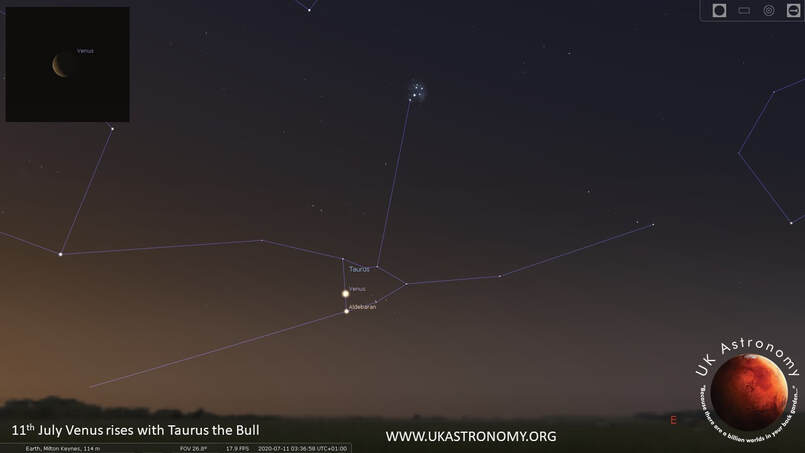 ​On the 11th, Venus is now very close to the bulls eye Aldebaran this morning.
Making the bull look to have two eyes looking down at us from the skies.
It will be a cool sight and make a great picture with the bright star and crescent Venus together.
you might be able to make out the crescent of Venus with binoculars.

Because Mercury and Venus are in between the Earth and the Sun we get to see them have phases just like our Moon as they orbit.
This helped a famous astronomer called Galileo prove that the Earth in fact orbits the Sun,
and not that the Sun orbits The Earth.

If you look at Jupiter tonight you may think it has gained an extra Moon,
but alas its only a star that is sitting close to the planet. 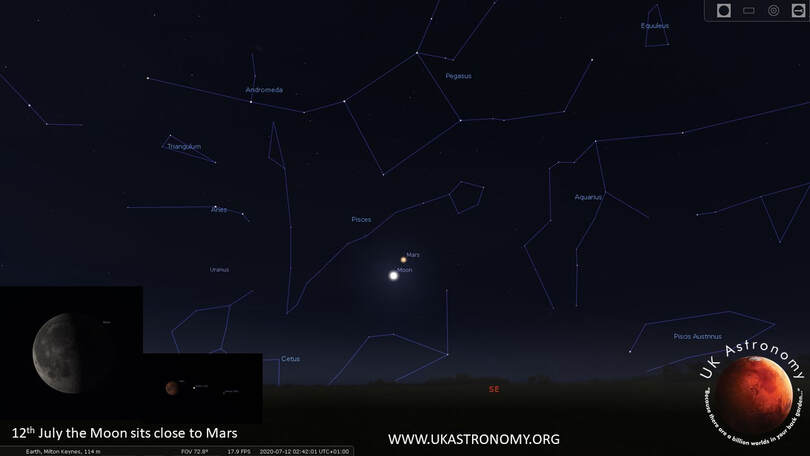 ​On the 12th, Our Moon now sits just below left of the planet Mars at around 59% lit.
It will be a great sight to see it next to the red planet.
Mars was known as the God of war because our ancestors saw it in the sky and thought it was made of blood. 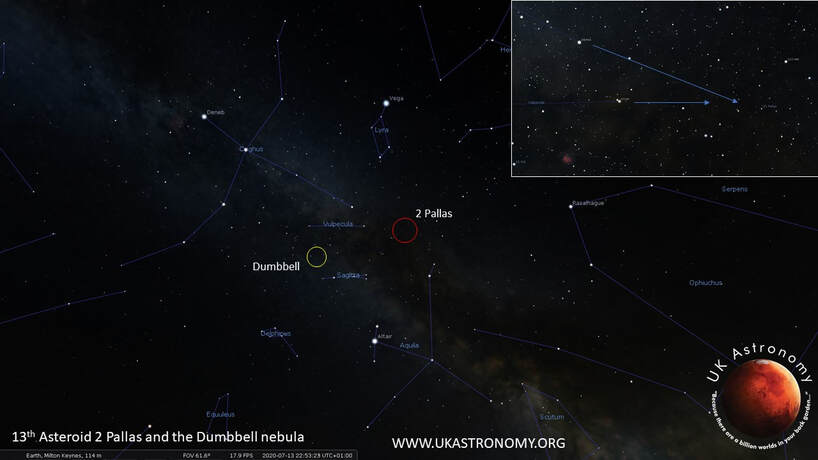 On the 13th for those asteroid hunters with a modest scope, 2 Pallas reaches opposition tonight.
Giving you a good chance at finding it.
It's in the constellation Vulpecula the fox.
If you follow its line straight down, the asteroid will be there, but may take a bit of star hopping. 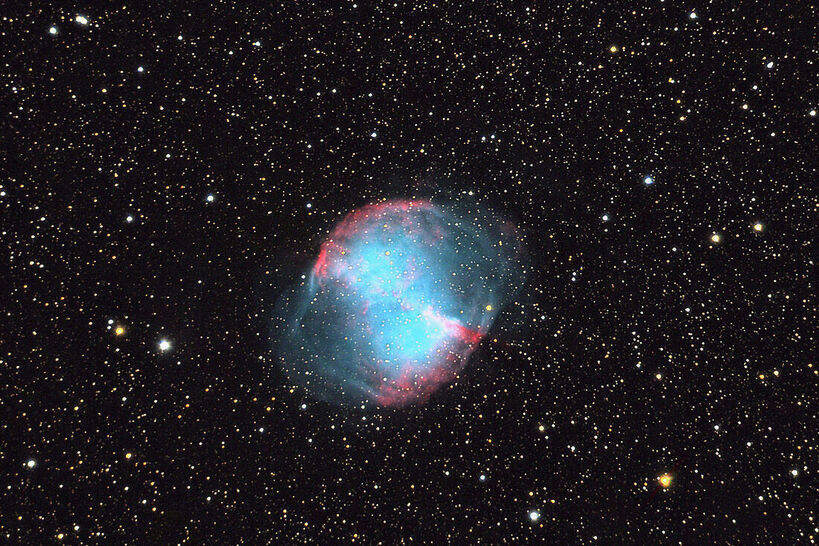 M27 The Dumbbell Nebula
​
While there, why not check out the awesome Dumbbell Nebula (M27), that sits between Vulpecula and Sagitta and see the death of a star as it’s expels its gas into space.
​ 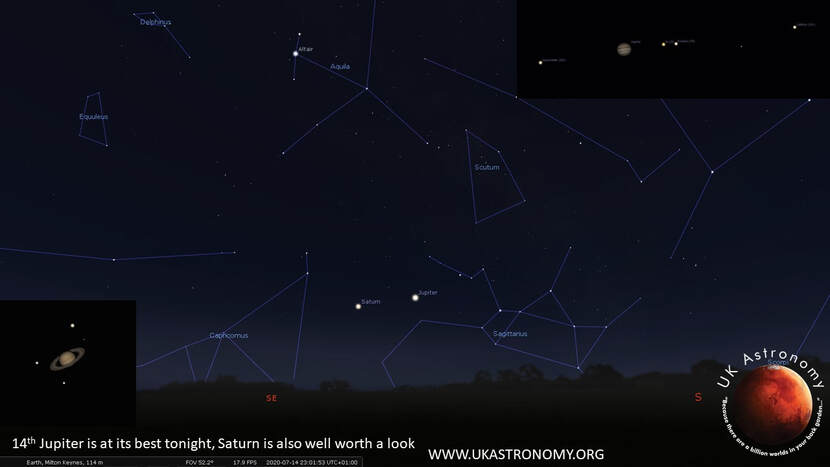 ​On the 14th Jupiter reaches its opposition tonight. Making it the best time to look at the planet,
as it will appear bigger and brighter in our skies.

Enjoy seeing its gas lines, great red spot (Which is a massive earth sized storm),
and it's four main moons orbiting it.

You will be able to view them,if you have a scope or some binoculars. 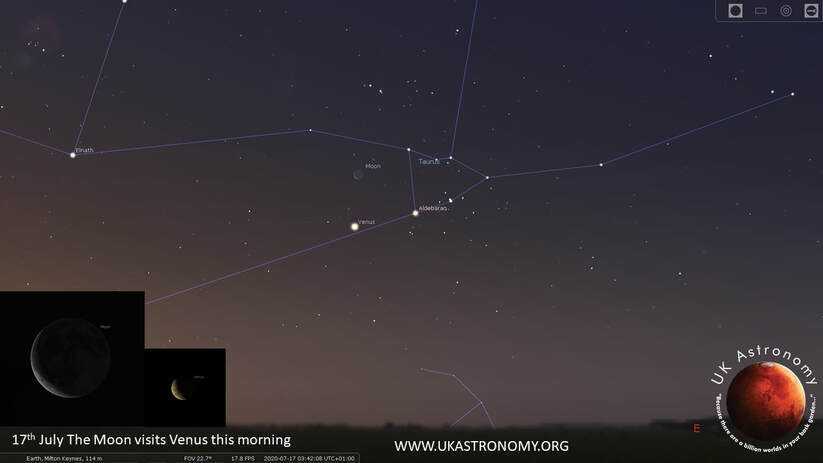 ​On the 17th, This morning’s Moon is now close to the bright Venus and star Aldebaran,
around 3am, in the east-northeast,but quite low in the sky. 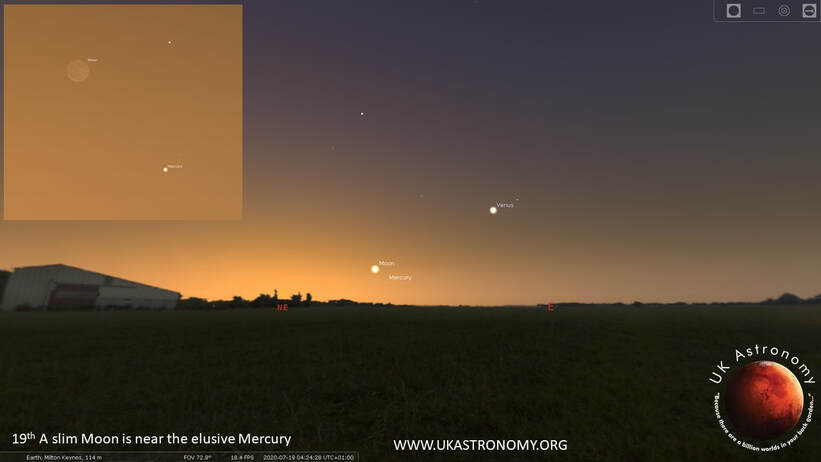 ​And on 19th The slim Moon is just above the elusive planet Mercury around 04:15am.
This will be a challenge for you to try, as it will be very low and the Sun will be rising.

Just be very careful when looking near the rising Sun.
​ 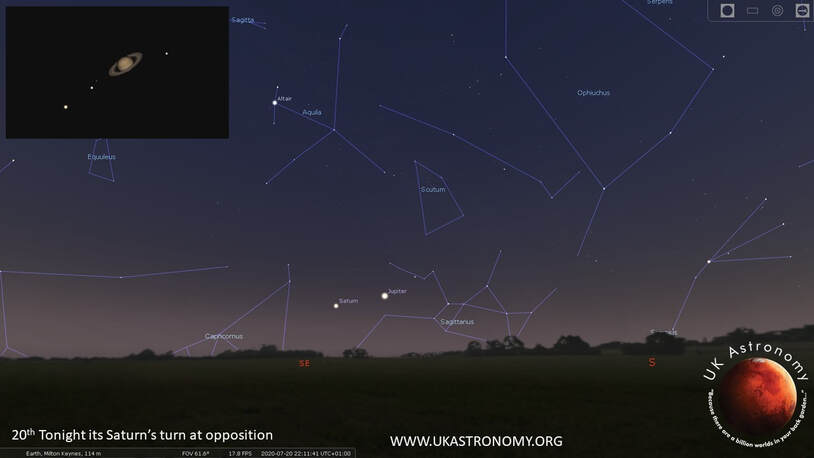 On the night of the 20th, it's the ringed planets turn to reach opposition.
Making it the best time to see its awesomeness.
There’s nothing quite like seeing the planet Saturn and it's now bright ring system of dust ice,
reflecting the Sun back at us. 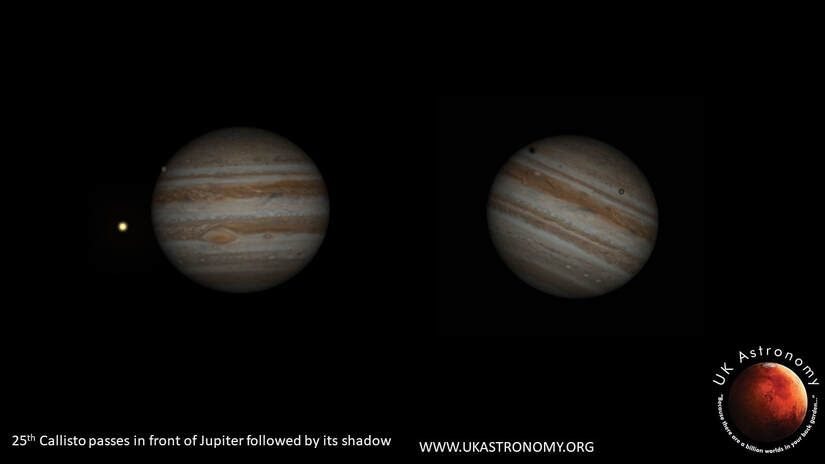 ​By now you should know where the planets are and hopefully how to tell them apart.
So on the 25th, we head back to Jupiter.
At around 10:55pm Jupiter's Moon Callisto, will pass across the planet, followed by its shadow at 01:40am.

​On the 30th, a minor meteor shower peaks at the end of this fun filled month.

The Delta Aquariids peak in the constellation Aquarius.
With around 18 meteors per hour.
But as we know, meteor showers are unpredictable, and you never know what you may see.

The shower originated from the breakup of what are now the Marsden and Kracht Sungrazing comets.
so if you see a shooting star, just think that was a piece of comet burning up in our atmosphere.​
​

TGP NOMINAL hope to bring you, the unveiling of The "Space Crafter" later in the year.
​
Powered by