On the 2nd The Earth reaches its closest point to the Sun.
Known as the Perihelion, it’s when our planet reaches its closest point in our orbit to Sol (Our Sun).
Although we'll still be 147million km away as opposed to 152million at its farthest.
There won't be any change in temperature to the UK as the Northern Hemisphere is tilting away from the Sun,
and therefore the weather is colder, creating our winter.

All you may notice if you have a telescope (with certified filter I must add) is it's diameter will appear slightly bigger.

REMEMBER TO NEVER LOOK DIRECTLY  AT THE SUN.
​ 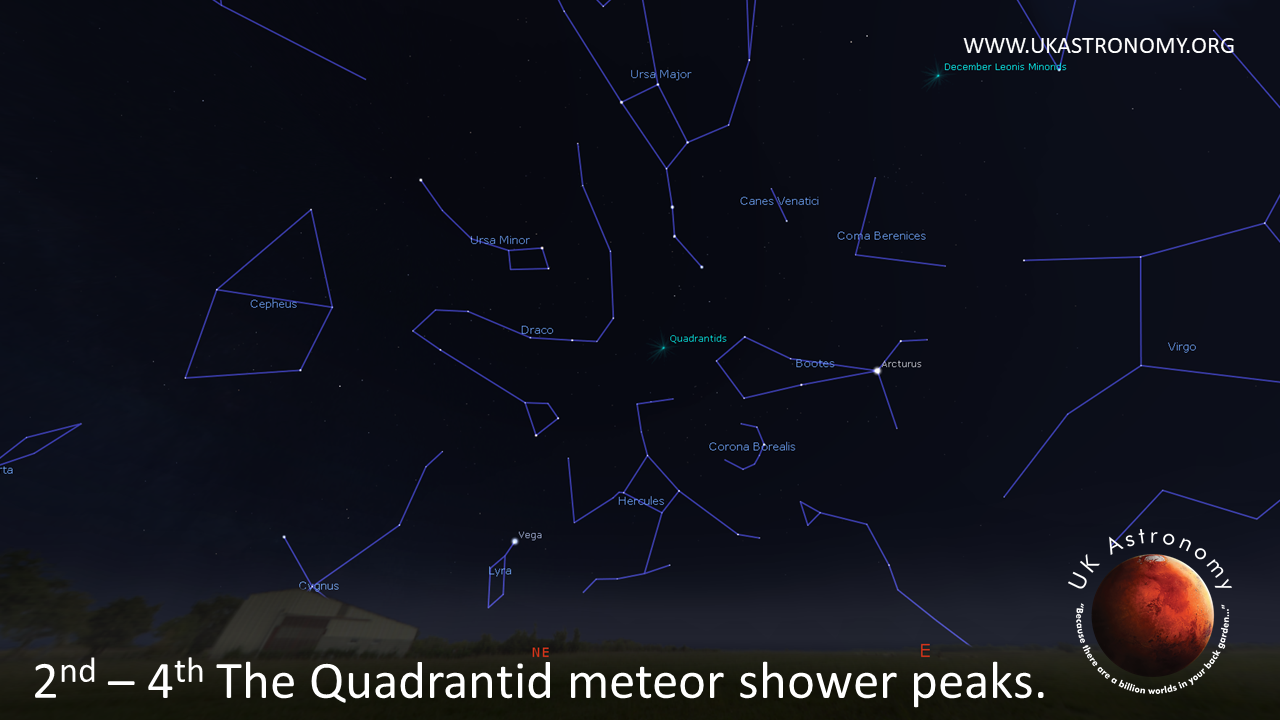 Between the 2nd and 4th will be the best time to see The Quadrantids Meteor Shower​.

They peak on the 3rd during the day so there’s a good chance on both nights of seeing some of these swift meteors. Unfortunately there is a Moon in the way which may wash some of them out.

​They radiate from between the constellations Draco (The Dragon), Ursa Major (The Great Bear), Hercules
and Bootes (The Plowman) 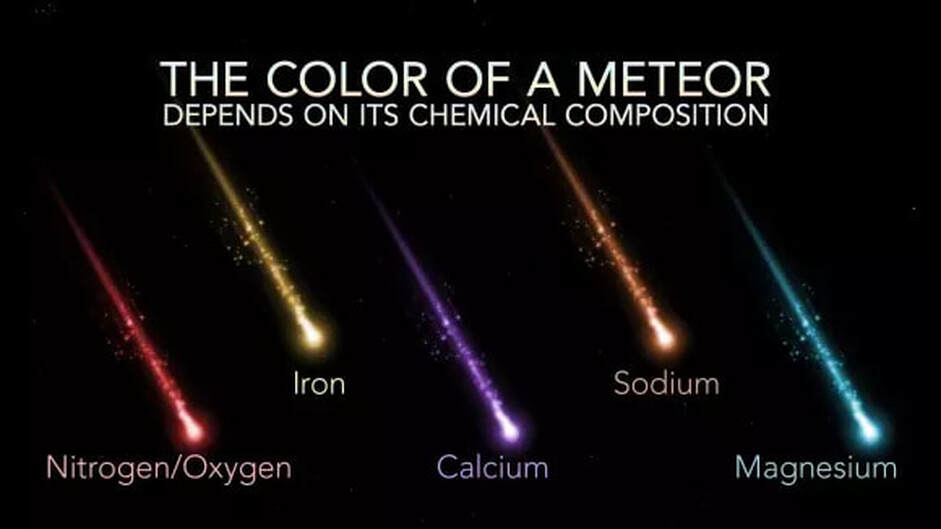 To find the Quadrantids, locate The Plough.
Follow its handle to the last star and watch around this area in the sky.

At around 120 meteors per hour, they boast to be as good, if not better than the more well known Perseids in August.
​ 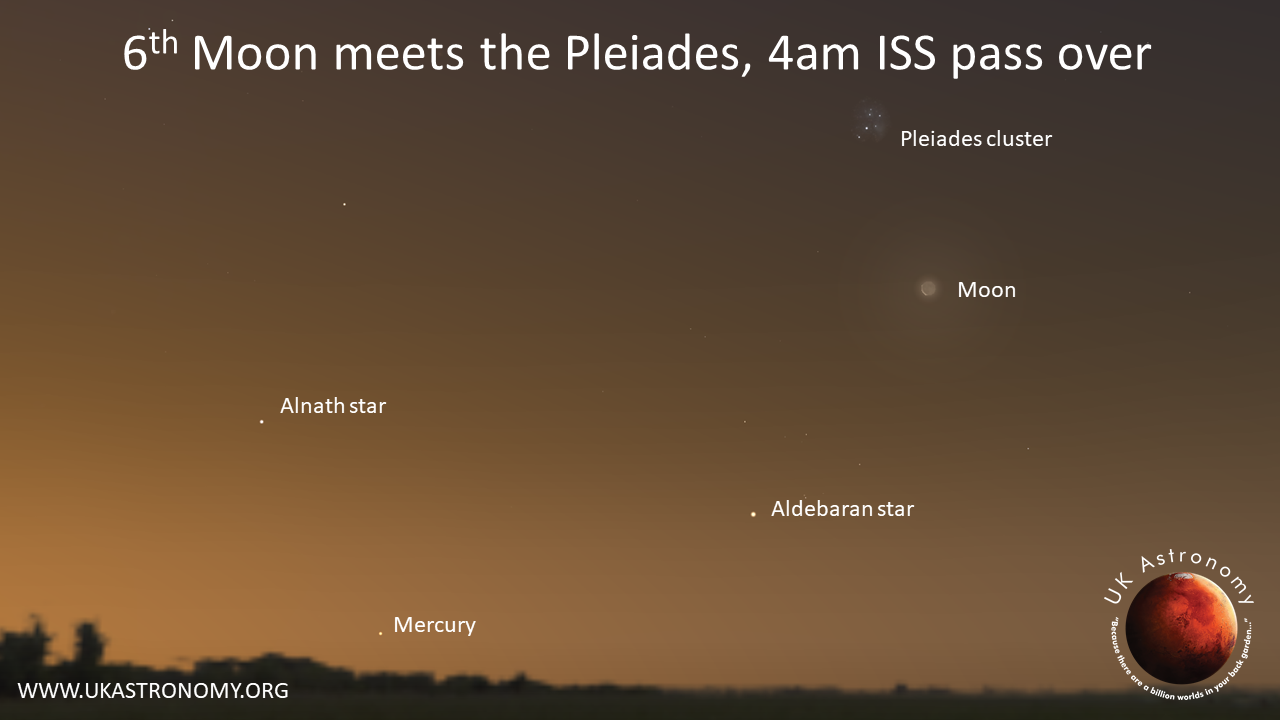 Look to the Moon on the night of the 6th to see a cool feature known as the Rupes Recta.
It's name is Latin for straight cliff and can be found tonight in the south-eastern part of ​Mare Nubiam.
It's known better as the Straight wall and it is a Linear Fault Line.

There is also some nice mountainous areas around here for you to see.
​ 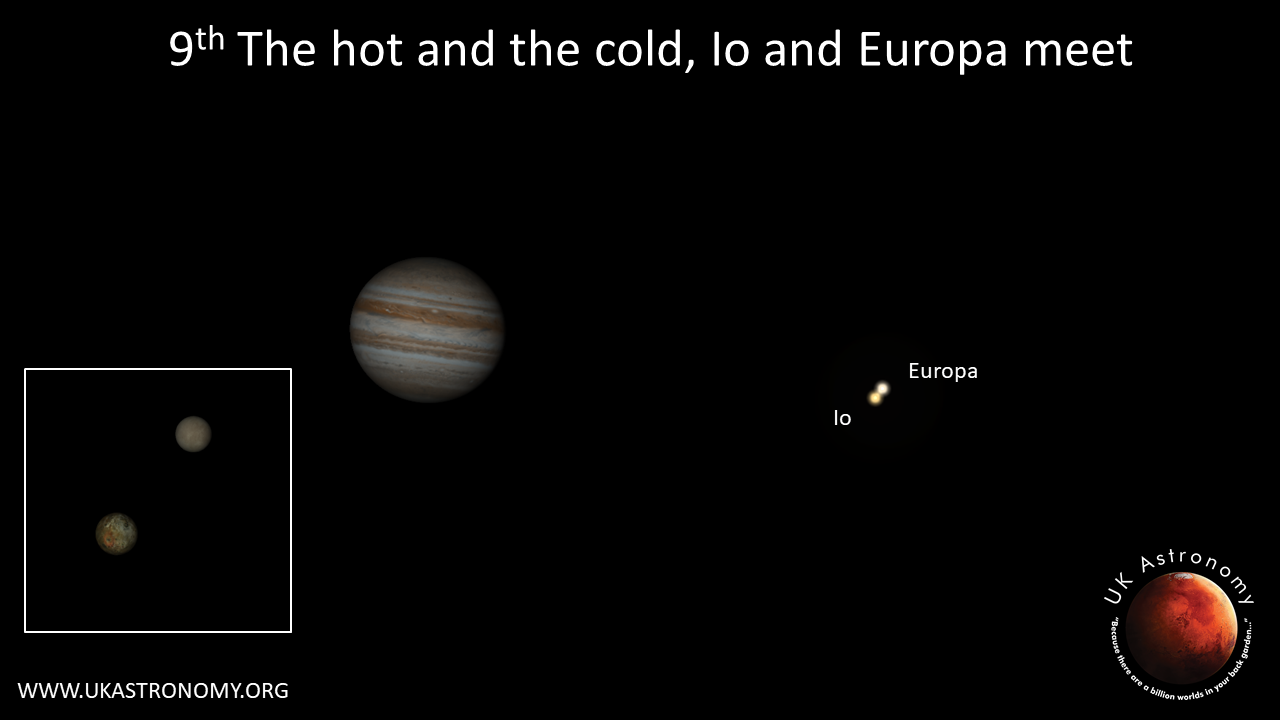 Just after sunset on the 9th, look to the South-West on a low horizon,

you should be able to spot the planets Jupiter, Saturn and a small Mercury form a conjunction,
in the shape a tight triangle in the sky.

A clear horizon gives you possibly the last glimpse of the gas giants before they dip out of our skies for a couple of days.
​ 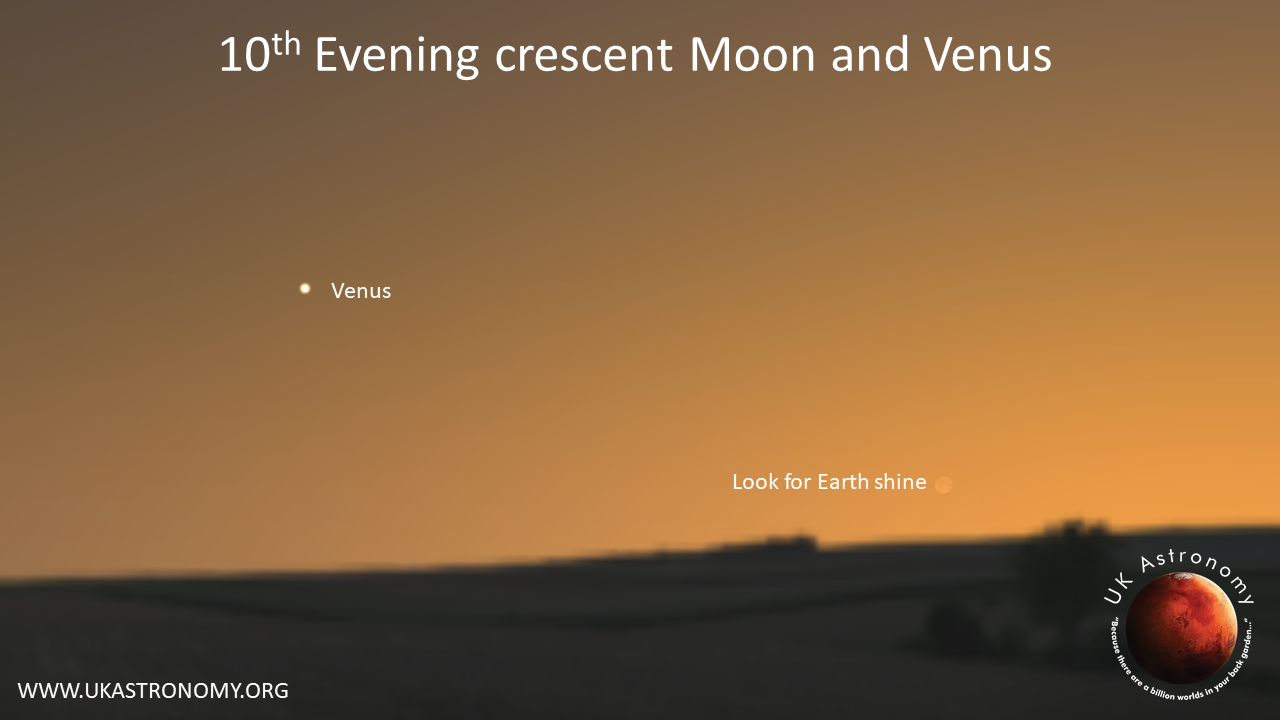 On the 10th, a thin Moon will greet those early birds to the South-east with the red star Antares just below left.
You may even spot a cheeky Venus coming up around 7am to their left.

Antares is often mistaken as the planet Mars to observers as it has a red glow to it.

​In the evening you have a chance to see a lower but tighter triangle of yesterdays planets before the set. 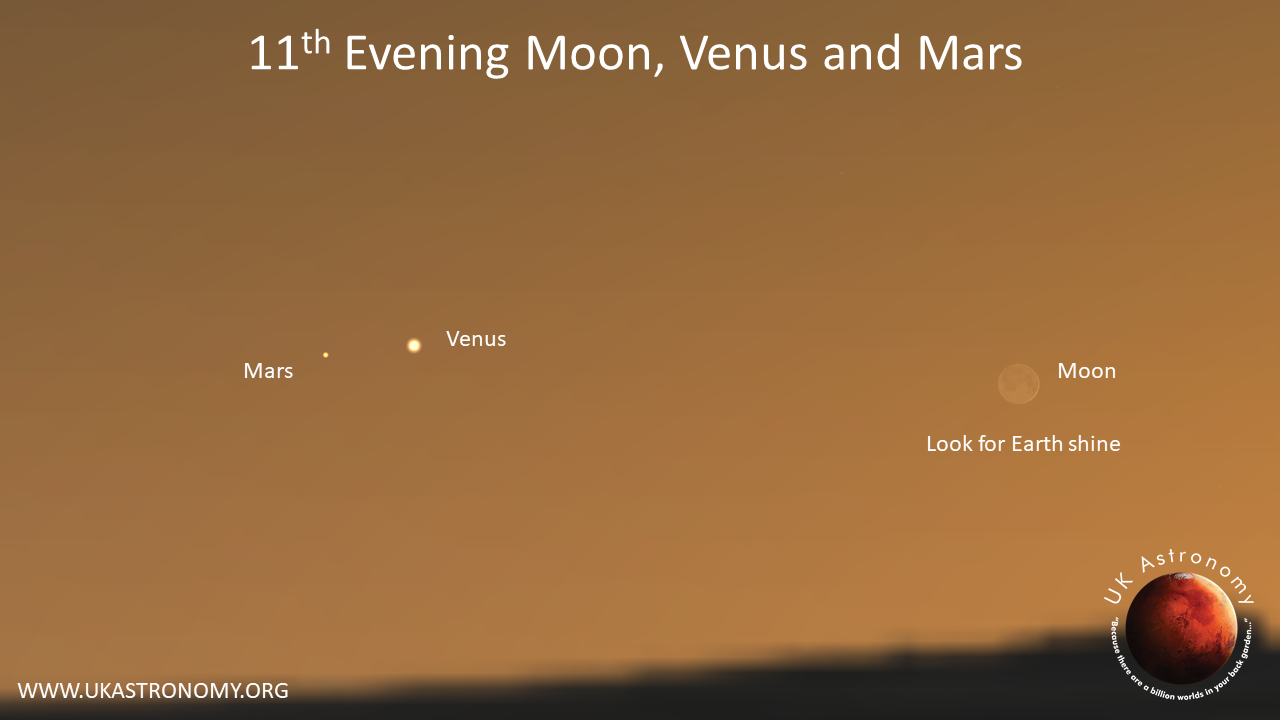 ​An hour or so before sunrise on the 11th,  you could spot a very thin Moon, just right of Venus (The Goddess of Beauty).
As it moves away from the Star Antares, towards the Sun.

There’s also another chance to see this afternoon's conjunction. 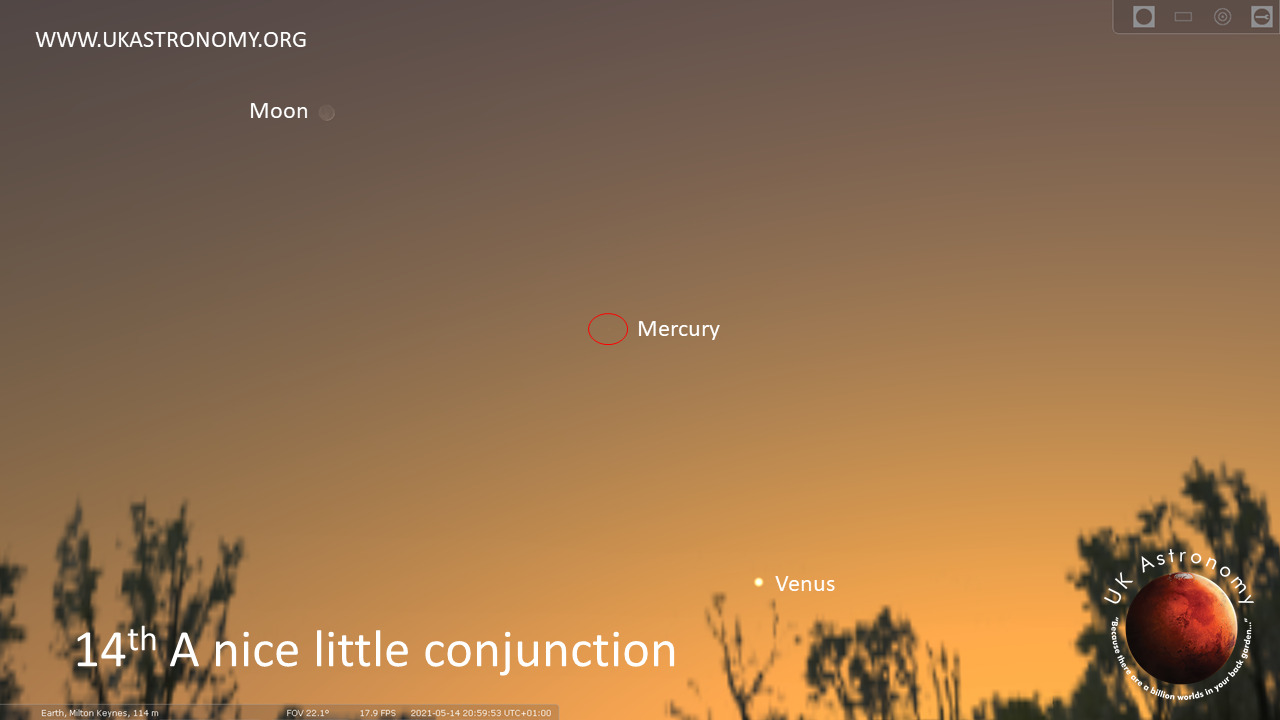 On the 14th there's another and probably our last good chance to see the conjunction,
of Jupiter, Saturn, Mercury and this time a very slim afternoon Moon.
Around 35mins after Sunset.
​

On the 20th at around 7pm, with a telescope possibly binoculars you may be able to spot a X and V on the Moon,
​ where the shadow and sun create an illusion as it glances across the tips of some craters.
​ 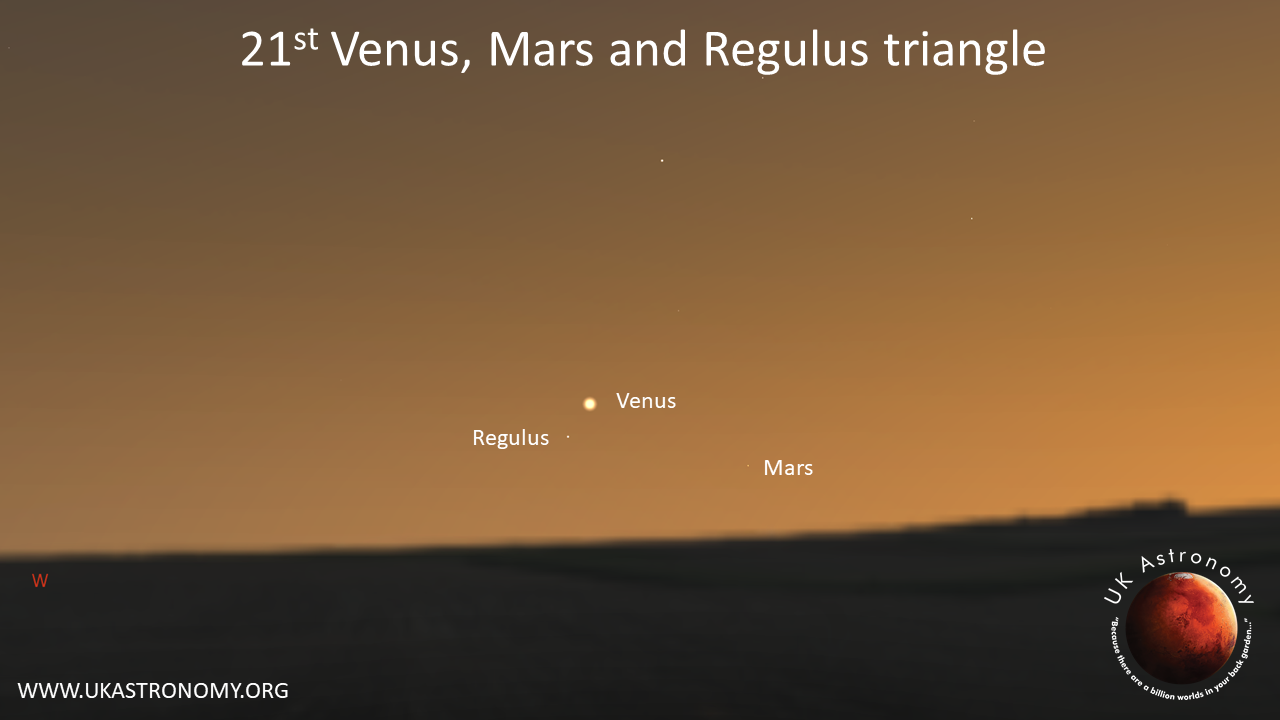 On the 21st, Mars (The God of War) is just to the top right of the just past half Moon this evening.
Although still bright it is quite hard to make out any details on the planet unless you have a modest scope,
and possibly a moon filter to help dim its brightness.
Apparently you will be able to see its darker features against the red over the month.

On the 24th, Mercury reaches its Greatest Eastern Elongation this afternoon.
Meaning it will be at its farthest point from the sun in our skies before heading back towards it.
After sunset have a look to the South-west and it should be visible for around 2hrs as it only takes around 88 days to orbit. It will quickly move back to the morning sky after a month.
​​ 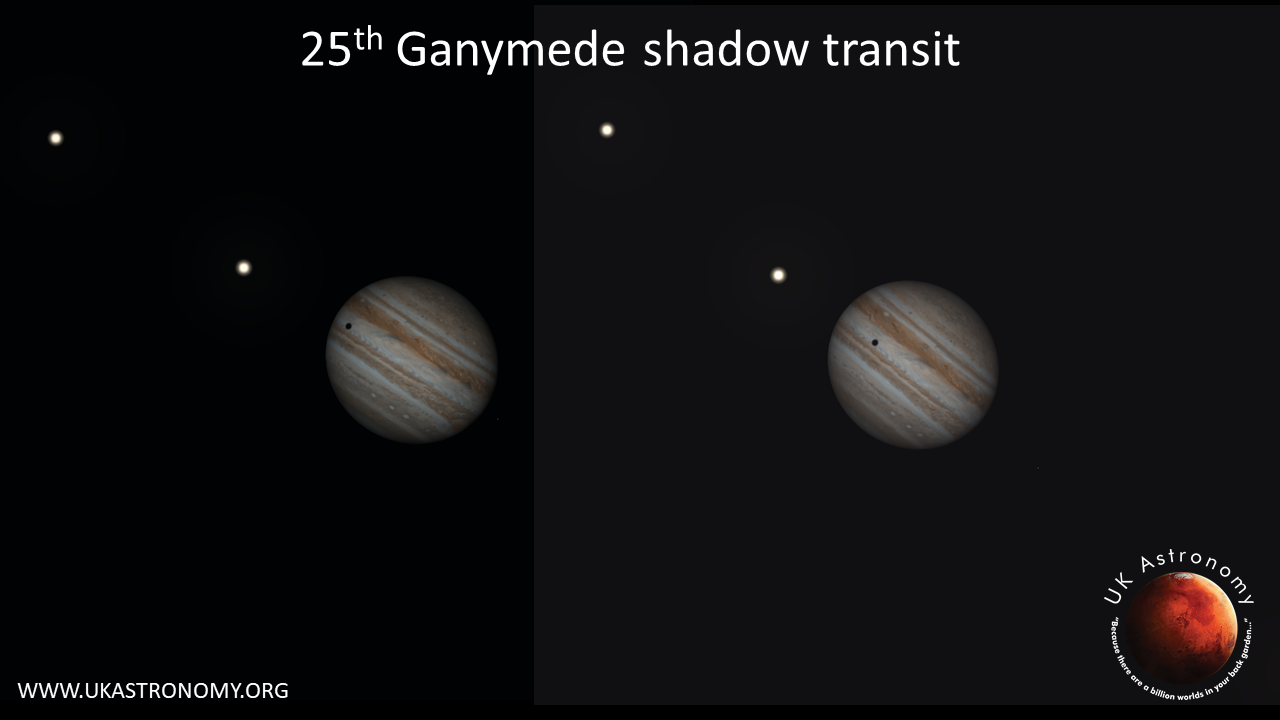 Around 11pm on the 25th, the nearly full Moon will start to slowly drift across the Open Cluster M35 in Gemini.
This cluster actually holds a Globular Cluster in its midst, NGC 2058.
so if you have a pair of binoculars or a Wider Field Eyepiece for you scope, you may see all three. ​​ 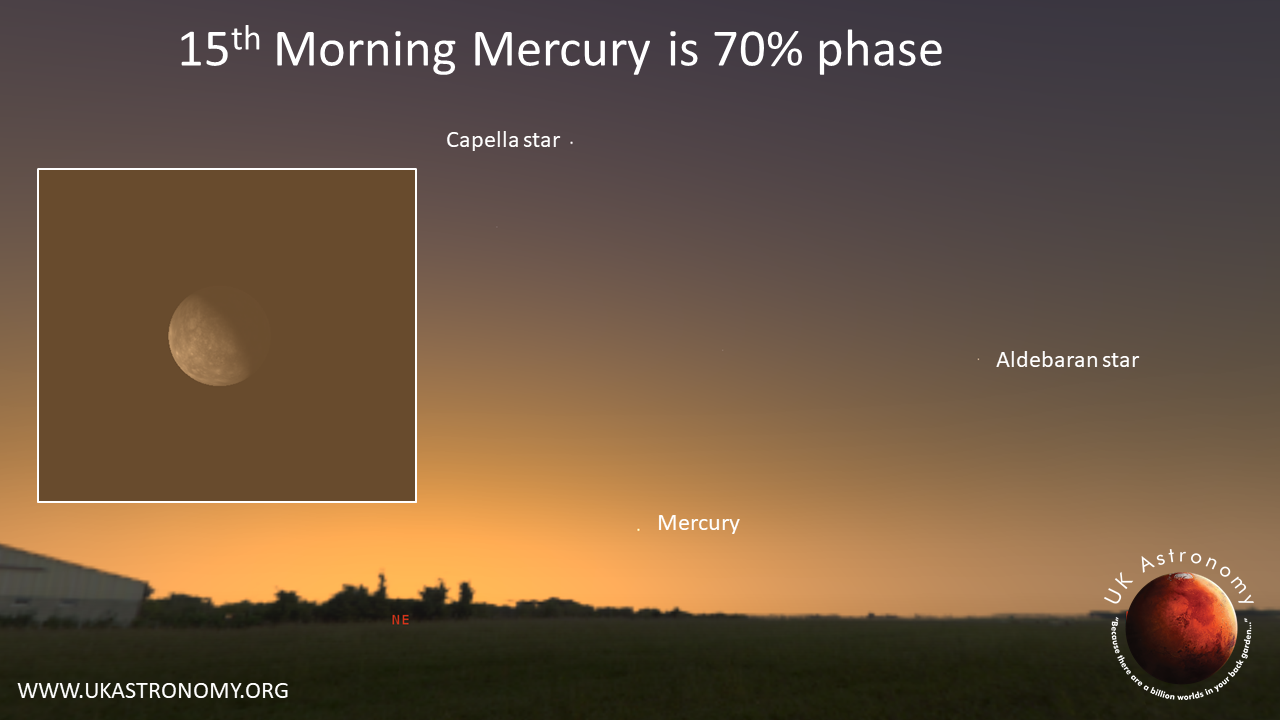 From the 15th, look out for the next few early evenings Moon,
when in the darker skies reflected light from Earth radiates back lighting up the shadowed side of the Moon.
If you get the right conditions over the next few days, the moon will look really cool,
as the thin lit crescent allows you to see the shadowed side,
slightly lit by the Earth shining back at it allowing you to see the whole Moon. 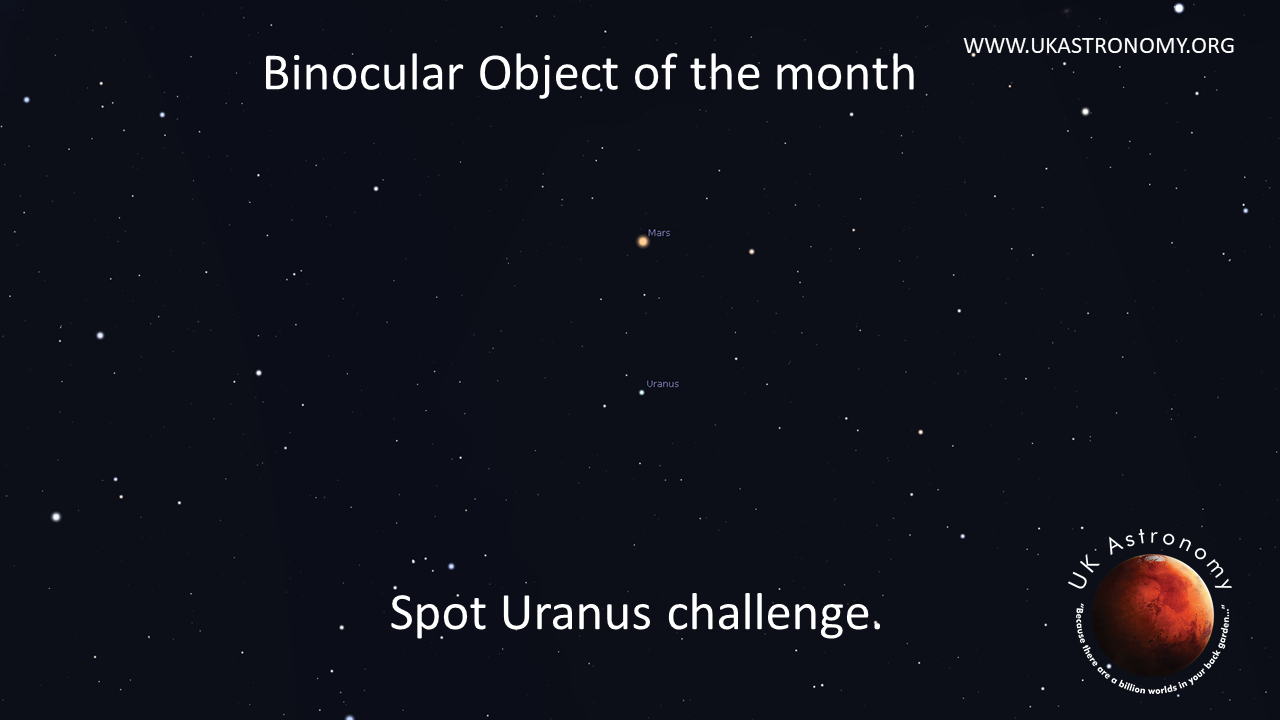 Uranus although a couple of months past its best it can be found just below Mars at the moment,
and should be easier to spot.

It should be visible with a pair of 10x50 binoculars in a decent sky, although a steady hand will be needed.
It’s a bit of a challenge for you.

So you should be able to spot the gas giant in the constellation of Aries (The Ram) below the God of War. 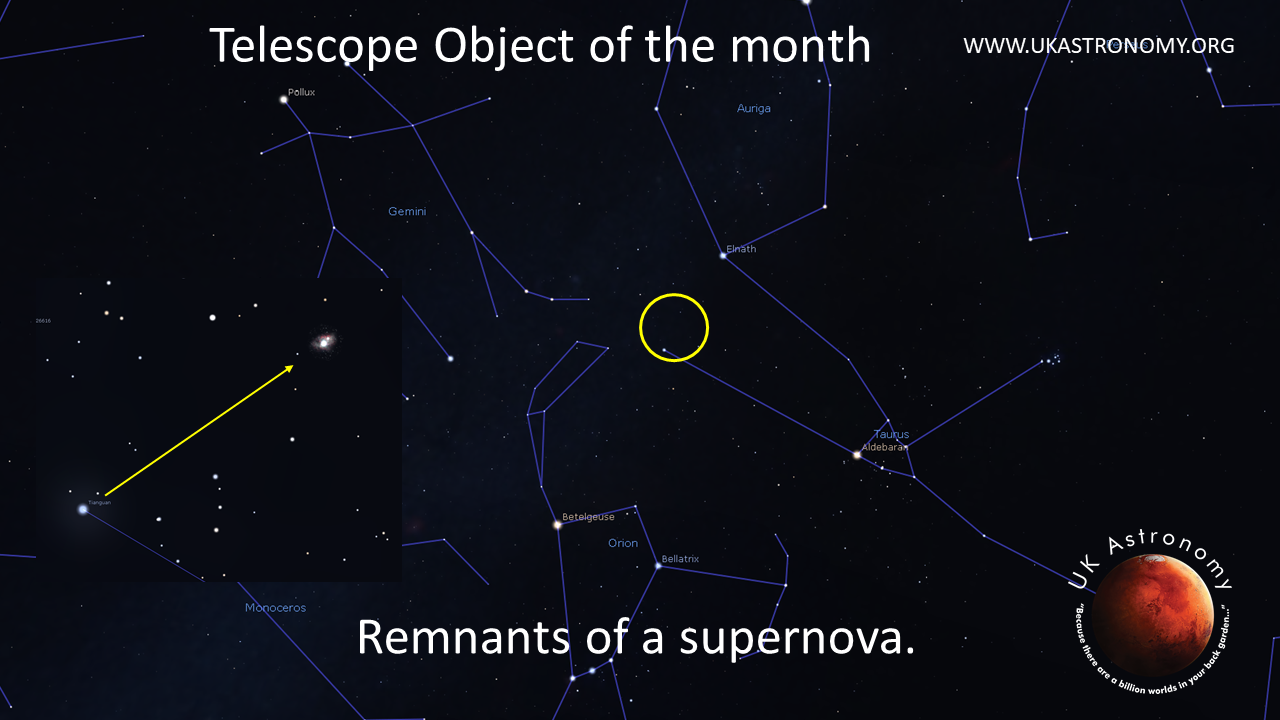 In the 1600’s Chinese astronomers reported seeing what they called a guest star (A Supernova).
​It was so bright that it could be seen in the day sky and last a few days.
The remnants of this huge explosion can now be seen in our night sky known as the Crab Nebula, Messier 1 or NGC 1592
It can be found if you follow the line from Aldebaran to the lone star that’s part of Taurus above Betelegeuse in Orion.
You will see what astronomers think looks like a misty white shaped crabs head,
​ that contains all the elements to build new planets, stars and life.