Ross Hockham from UK Astronomy can't be with us this month,due to Covid-19. So in his absence,​ ​TGP NOMINAL Honorary Crew Member, Founder of Twice Brewed Stargazing and Resident Astro-Photographer for UK Astronomy
'Wil Cheung' is taking the reins for February's Sky Guide.

February for me, is one of the most absolute favourite times for looking up and night sky.
It’s because we're pretty much in the middle of Winter with super dark Skies and long night as well.
So let's start off with February 1st and 2nd, right at the top of the month.

The planet Mercury is still visible, so Mercury is a planet that stays relatively low on the Horizon
and it's also one of the most elusive planets to see.
However I feel it's super rewarding when you do get to see it.

So around the 1st and 2nd are probably your best chances to see it.
About 40 minutes after sunset, look towards west south-west, low on the horizon
and you might just see this tiny little dot of a star
(Well what you might think is a star) just sitting there
but of course using binoculars will aid you greatly. 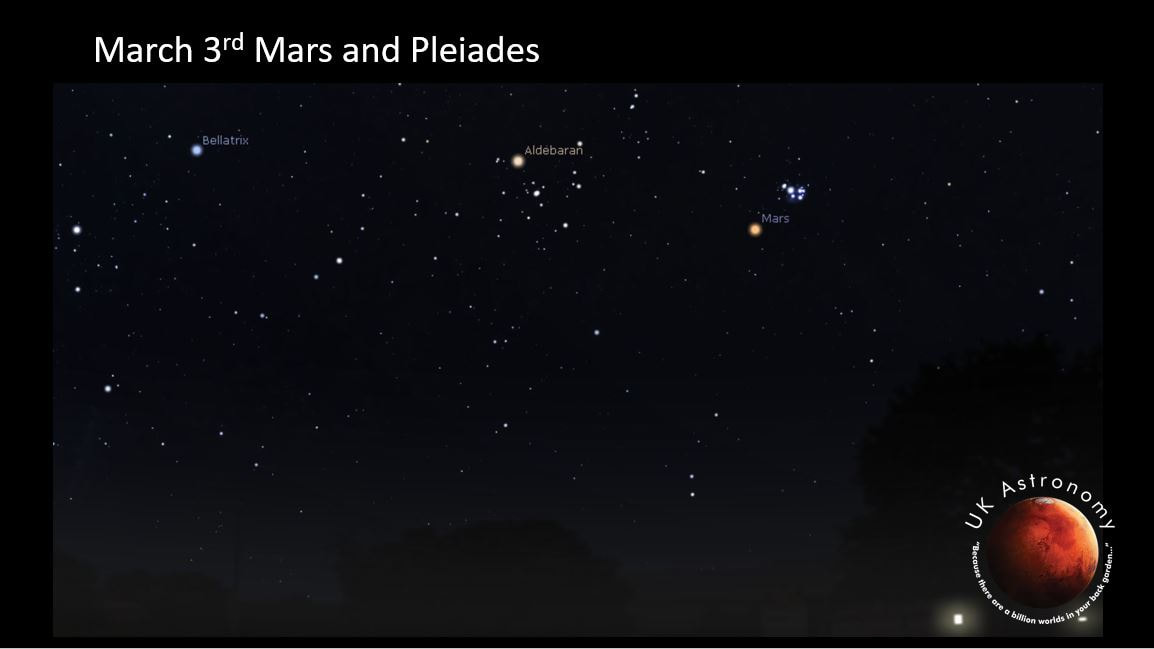 February the 3rd is exactly the midpoint of winter, so it’s in between the Winter Solstice and the Spring Equinox.

Just a little fun fact for you, the Winter Season is actually the shortest of them all. Now the reason behind this is because of something that Ross mentioned last month.
And that is because the Earth was at Perihelion in January, which is closest point to the Sun in its orbit around the Earth
so the Earth actually moves faster as it's closer to the Sun.

Also on the 3rd, there's no moon in the sky, so a really good chance to look at the planet Uranus
as it gets high in the sky but I would say the best time to look at it, is around 6 p.m.

The reason why I have chosen this date is because again, there's no light pollution from the Moon
which helps you spot this faint planet.

It is visible with the naked eye, but again using binoculars or a telescope will help you.

​If you are in a Dark Sky Site and you know exactly where to look for it
then you should have no problems spotting this really awesome planet.

The challenge as well is February will be most likely the last month that we're going to see Uranus for a while.
​so I strongly urge you, if you have got clear Skies, go and give it a go. 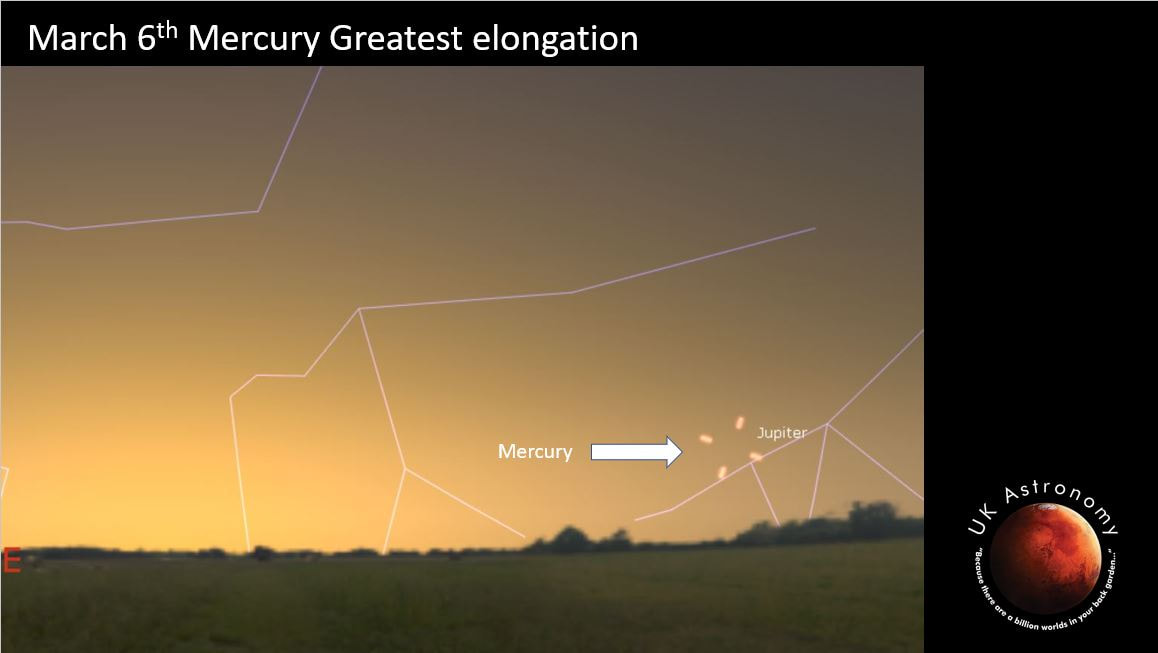 ​February the 6th now, a really beautiful sight is the conjunction of the Moon and Antares.
Which is a bright super red star low on the horizon again.

it's called Antares because that word itself means Anti-Mars
So called because it looks kind of like Mars and it’s a red.

It will be a stunning sight, seeing both the moon and Antares in the morning sky on the 6th.
I love seeing Antares, it's part of the constellation Scorpius, which is really cool constellation to look at. 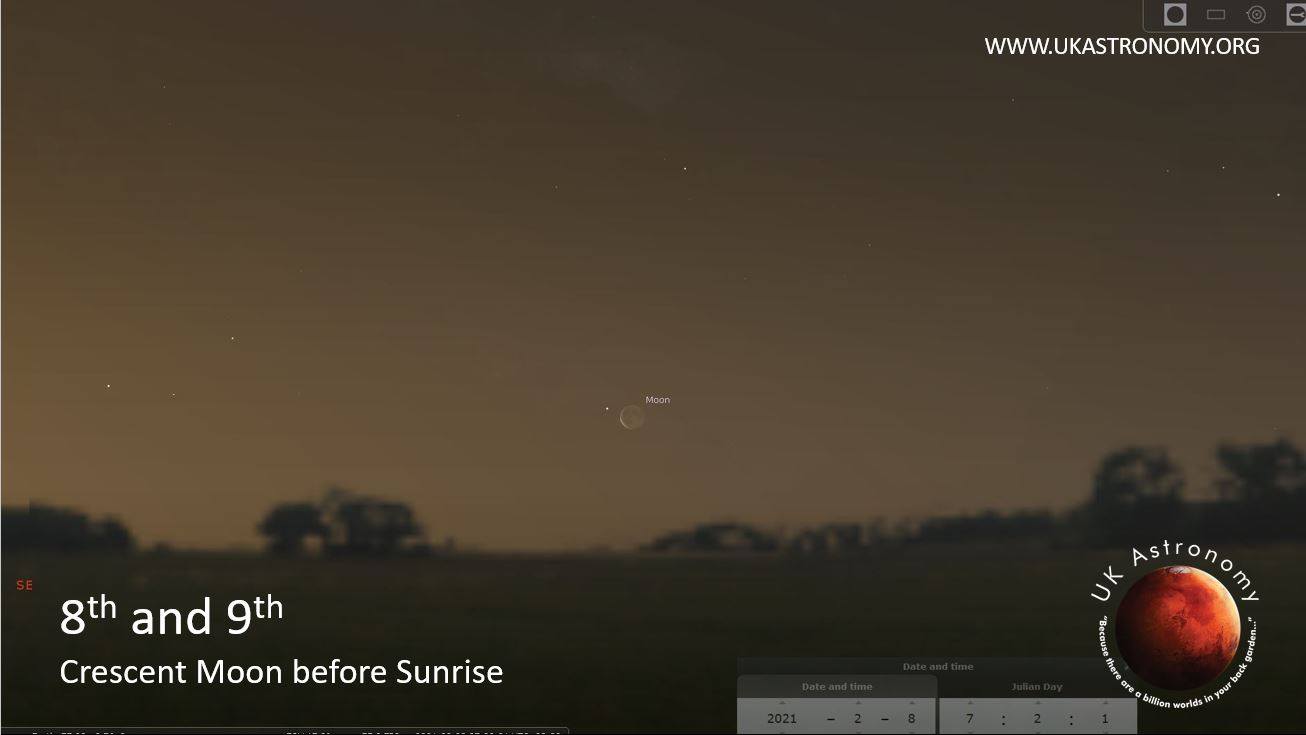 On the 8th & 9th, 20 minutes before sunrise is when I recommend folks who are the early risers amongst you, go outside and see if you can spot the tiny waxing Crescent Moon.
I don’t know what it is, seeing a full Moon is great but seeing a really slim Crescent in the sky it's just awesome
when you just spot it for the first time.

So February 8th and 9th, 20 minutes before sunrise have a look outside.
Binoculars will certainly help, just give a go and scan the skies for a bit.
​ 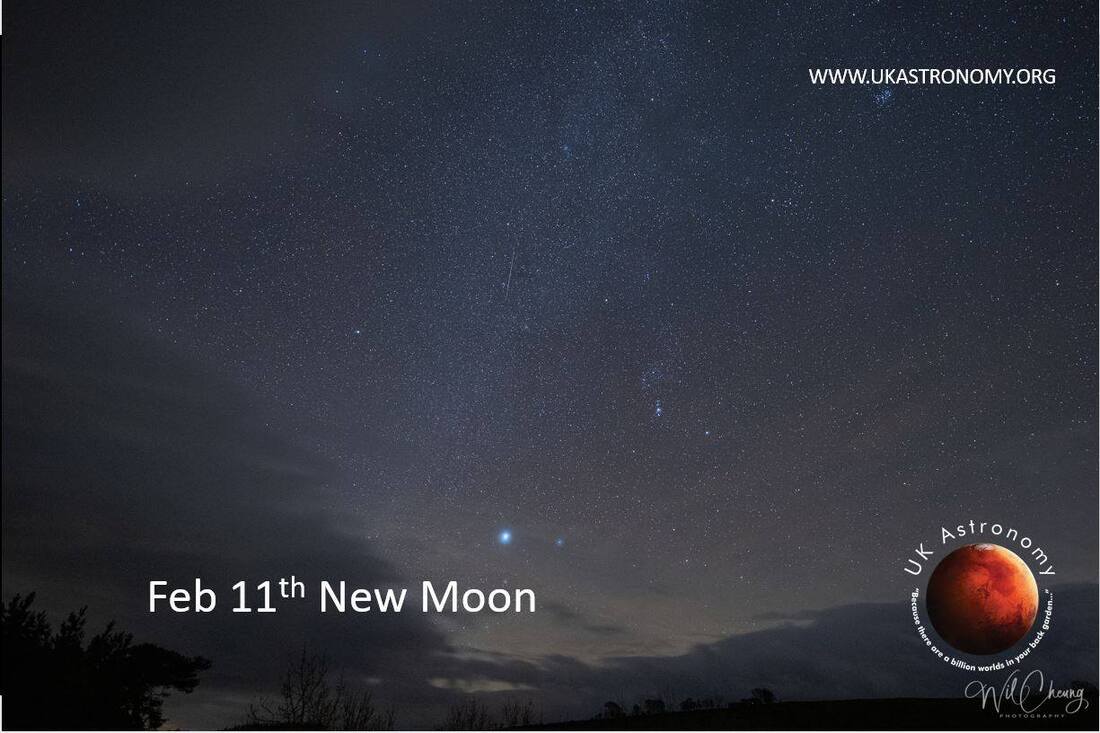 February 11th is when the new moon of February starts, so the perfect date in February for deep space stargazing.
​ 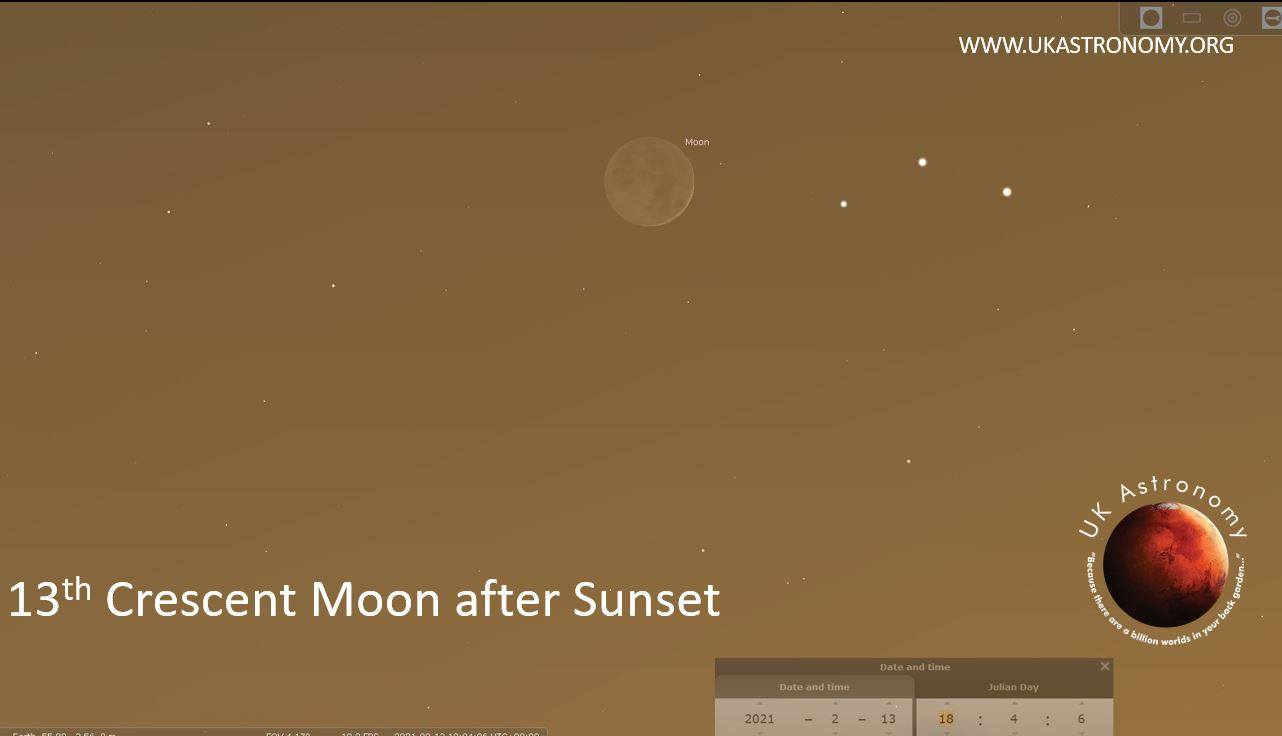 ​On February 13th, because we've passed the new Moon Period and the Moon is starting to get big again.
At around about 45 minutes after Sunset, look West South-West
and there will be an opportunity to enjoy a 4% Crescent Moon in the sky. 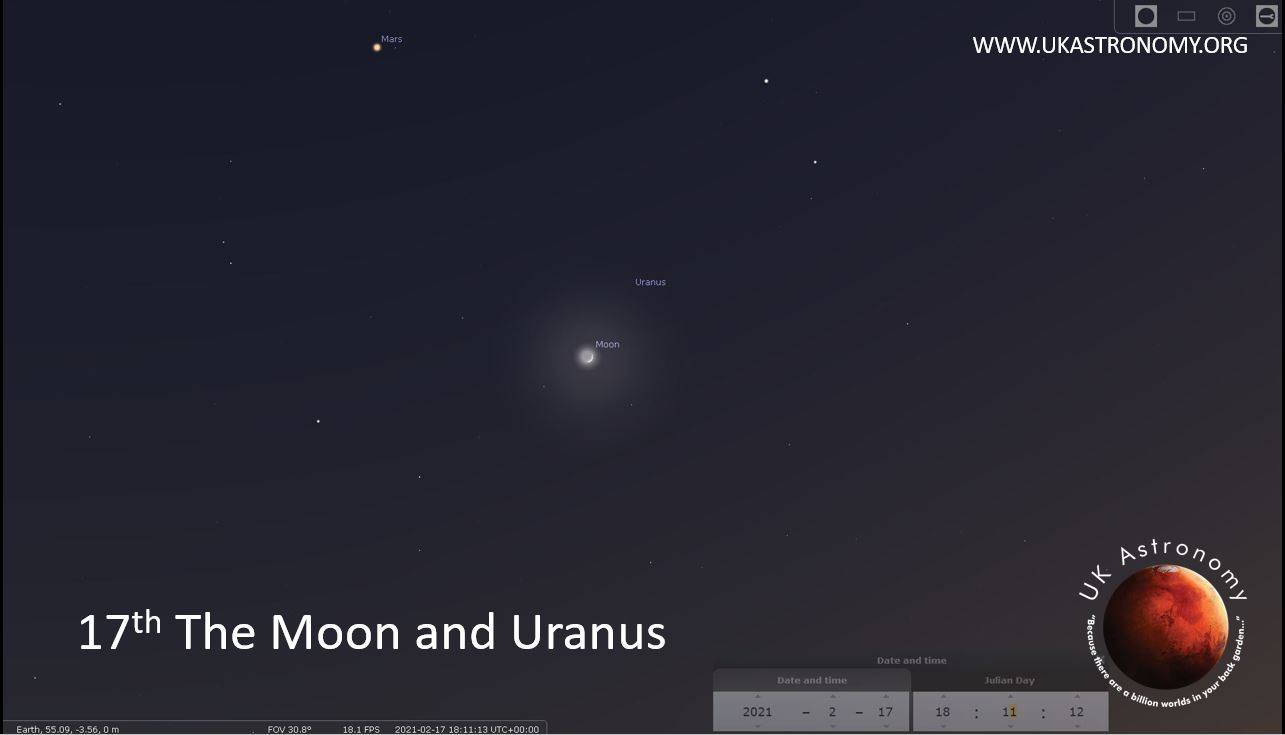 Because Uranus is a naked eye planet and you have relatively dark skies, just seeing the two would be pretty awesome. 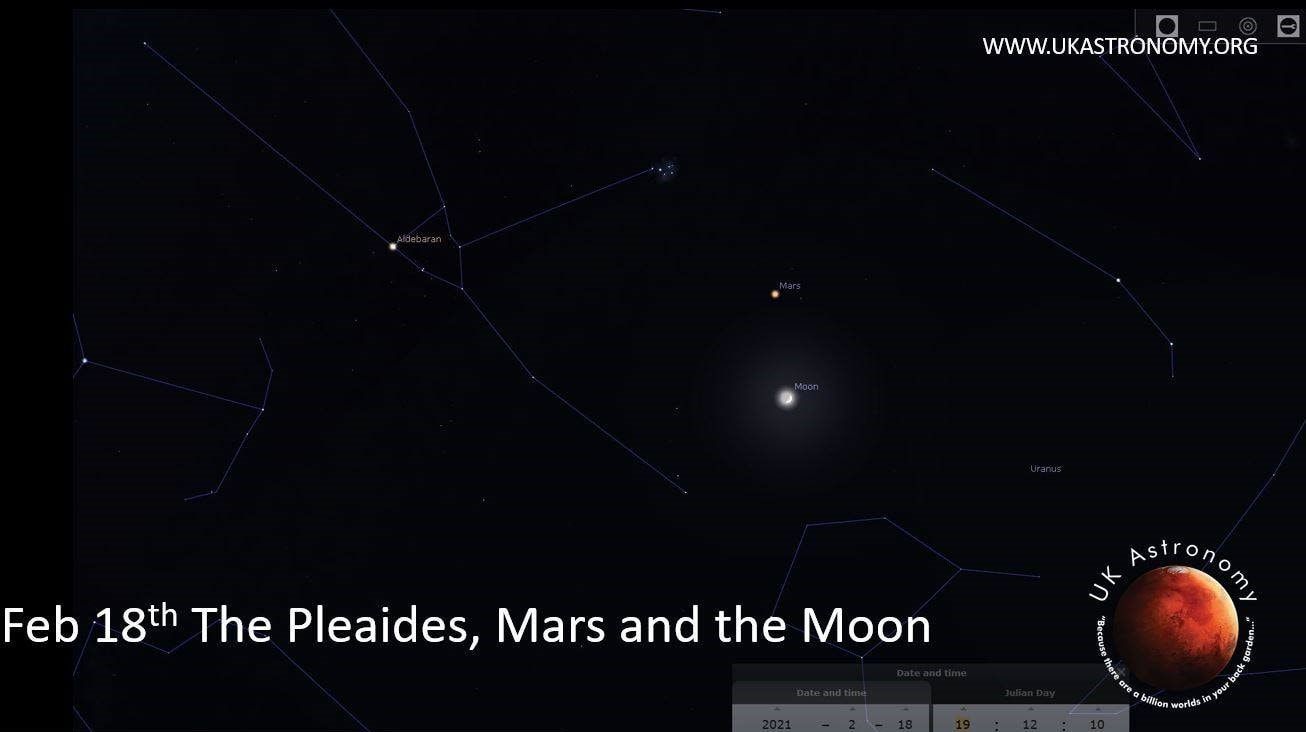 February 18th now, we've got our favourite the star cluster, the Pleiades or the Seven Sisters
which is our closest open cluster.
Certainly a winter constellation and something to look at and enjoy.
But from February 18th you've got the Seven Sisters, the planet Mars and the moon for a triple optical conjunction.

They're not going to be super close but will be in the same part of the sky and the three objects will look pretty magnificent.

So that's a good one to look out for and probably the highlight for myself for February. It’ll be my target to see. 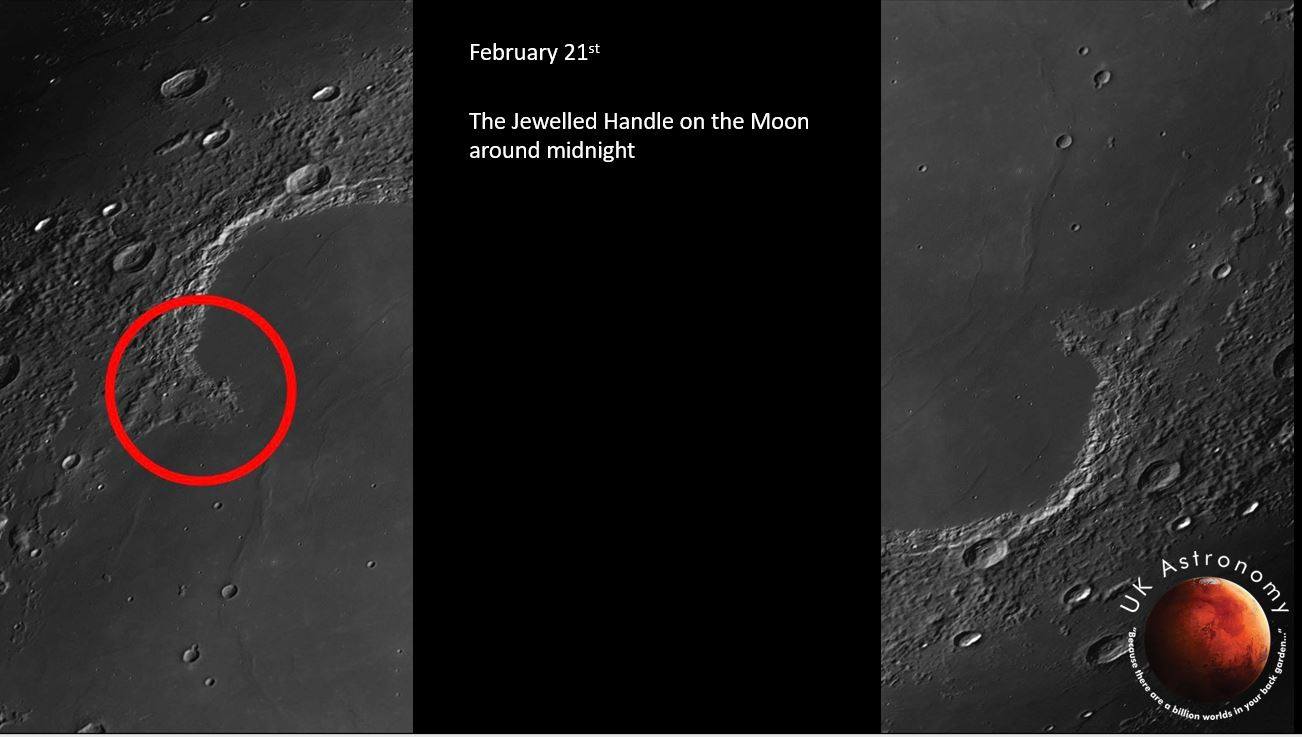 For the folks that enjoy looking at the surface of the Moon, seeing the craters
and the effect of the sunlight lighting up the different features on the moon
then have a look at the moon on February 21st around midnight and find the Jewelled Handle.

​The Jewelled Handle is found along the mountain range Sinus Iridium and it happens when
the light just captures the tops of the mountains during the Lunar Dawn and creates a beautiful stunning effect. 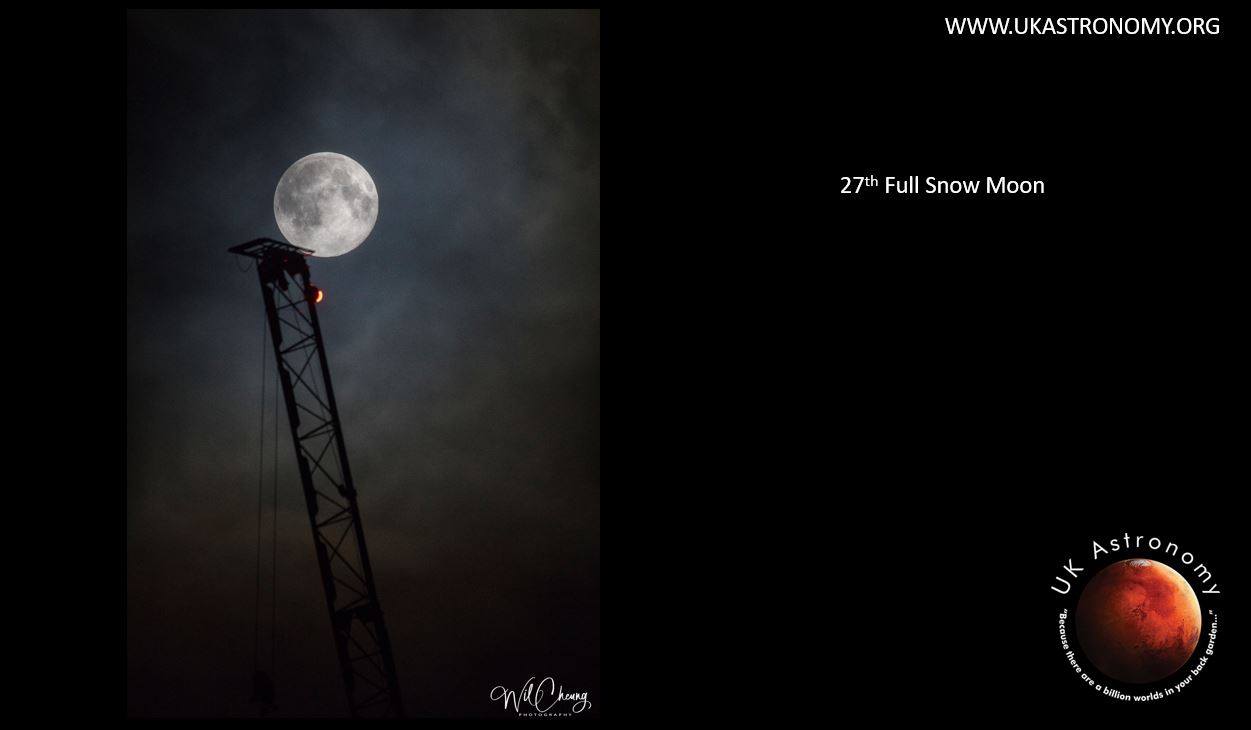 February 27th is the full moon of February.
It’s called the Snow Moon and hopefully there won't be much more snow
and I won't be freezing to death when I'm doing my Facebook Live Streams

But, one of the things I really enjoy taking photographs of is, the big Full Moon over that nice landscape. 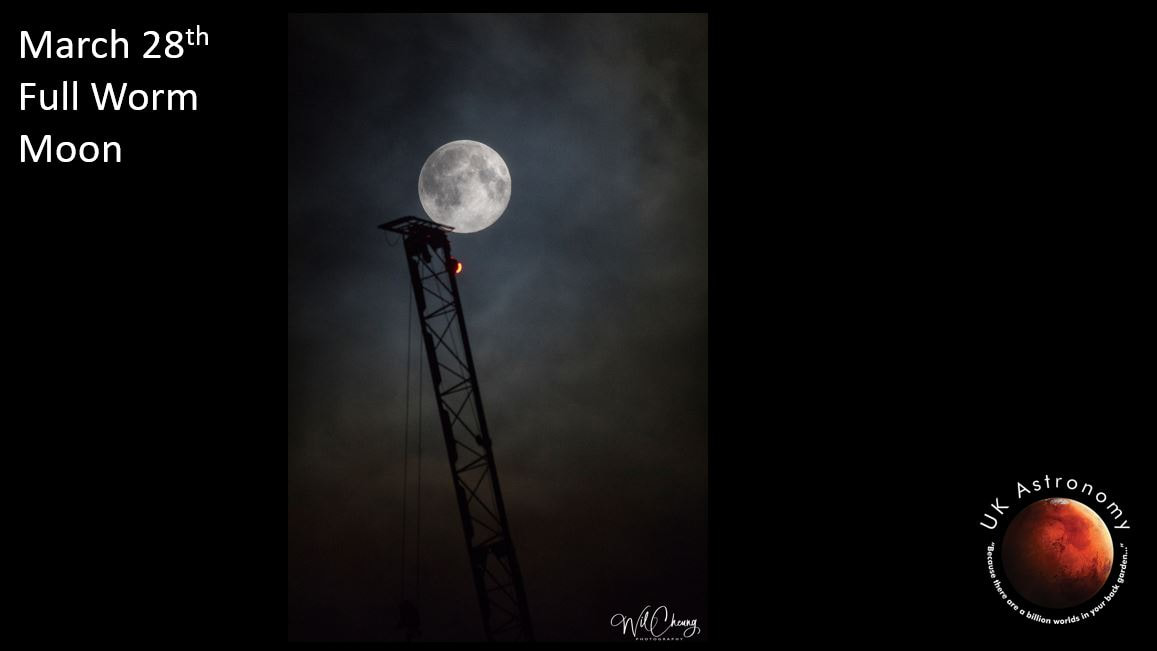 February 28th is probably the highlight for many people.

It's the conjunction of Jupiter, Saturn and Mercury.
Maybe conjunction is wrong word to use but they certainly we will be in the same part of the sky
and you'll be able to see the three planets.

Now, it will be a challenge because there’s still a lot of light, the planets are very low
and they’re also quite faint especially Mercury.
So 45 minutes before sunrise in the Eastern Sky, will be he best time to view them
and will be a very awesome thing to see.
​

​Wil Cheung'S oBJECTS OF THE MONTH: 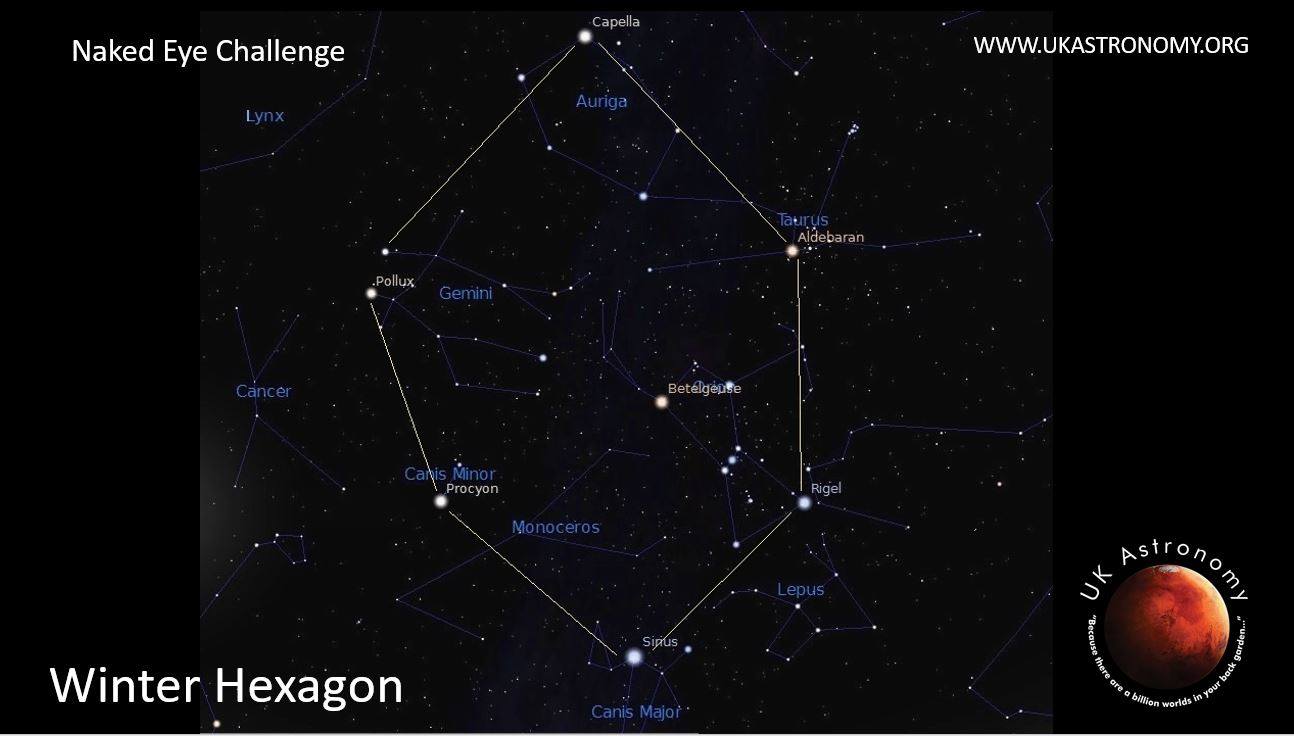 It’s called the Winter Hexagon, it's an Asterism which is the word we use to describe a pattern of stars.
So it's not necessary constellation but combination of celestial objects.

It consists of six stars and if you join them up like a dot to dot picture, it makes a hexagon shape.

The Winter Hexagon is made up of the stars, Rigel, Aldebaran, Capella, Pollux, Procyon and Sirius.

February is going to be a great time to see the Winter Hexagon although you will have to wait until later in the evening to see the complete hexagon shape, as Sirius is the last star to rise.

So have a look out for it, as it’s an awesome thing to look at in the Winter skies. 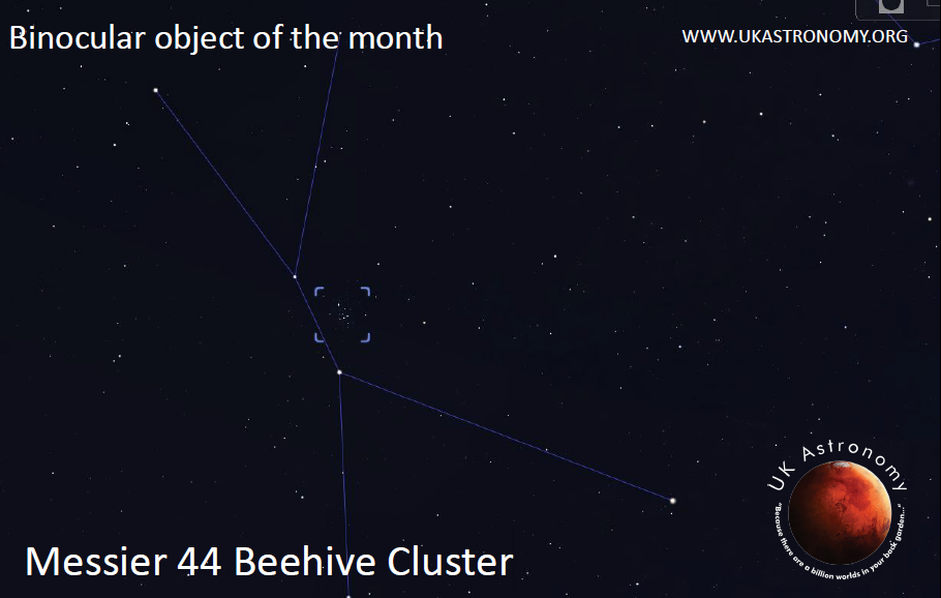 My binocular object is Messier (M44), The Beehive Cluster also known as Praesepe in the constellation Cancer.

It's one of the nearest open clusters to earth at around 610 light years away containing around 1000 young stars.

Binoculars will find the cluster easily especially when there is no Moon interference. ​

It’s actually my number one favourite thing to look at with binoculars. 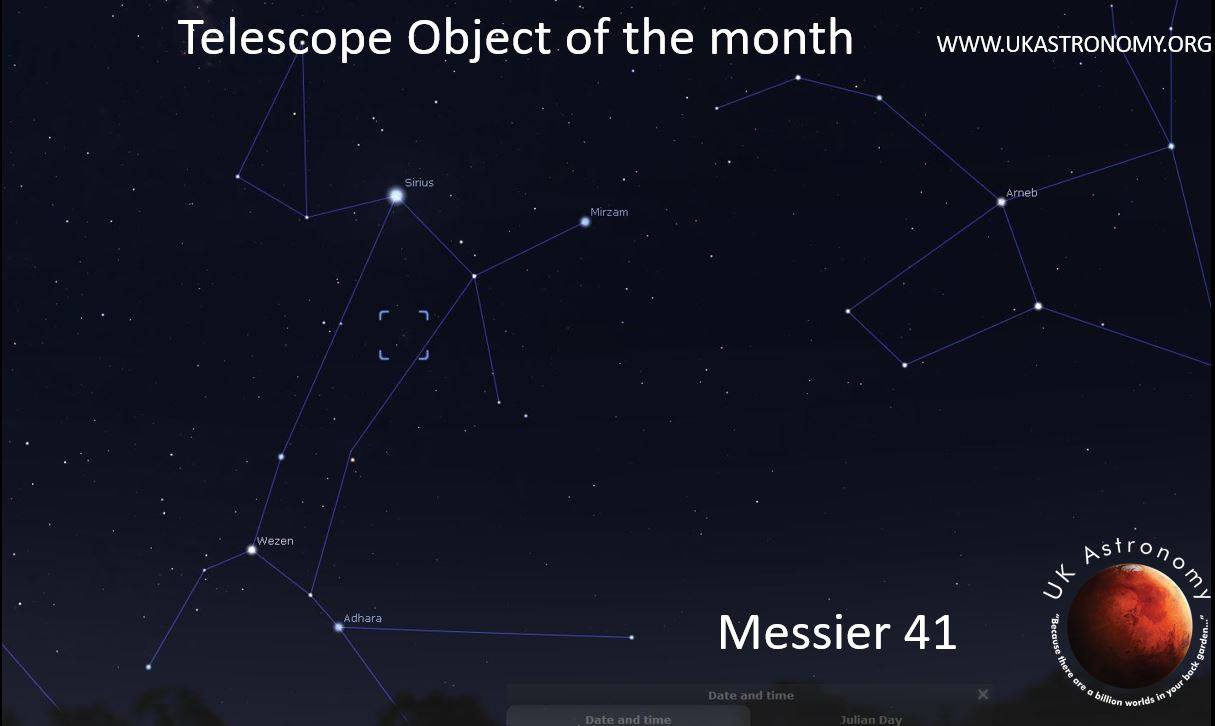 Now onto my telescope object of the month!

Messier 41 (M41) an open cluster around four degrees south of the brightest star Sirius would be a good target in February.
At magnitude 4.5, telescopes should have no trouble with it.

The cluster contains around 100 stars and are around 190 million years old.